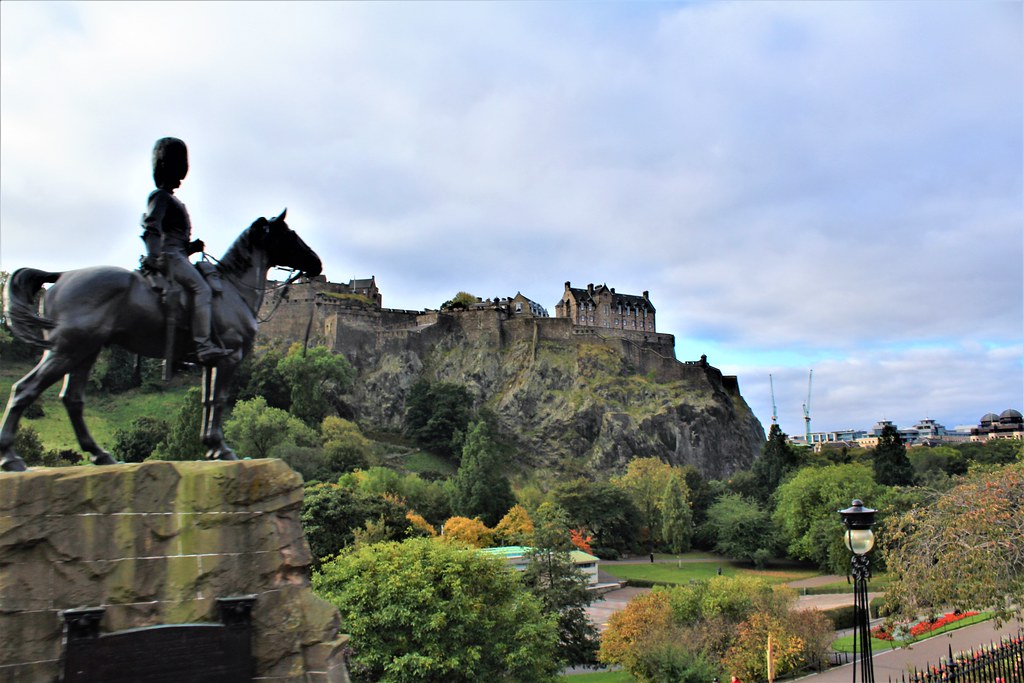 (Above image is a capture of Edinburgh Castle from Princes Street..)

Edinburgh is Scotland's capital city with population  of 482,000. It is located in the S.E. of the country, close to the North Sea and Firth of Forth.

The city is home to the Scottish Parliament and as such a huge support bureaucracy is based in and around the city. Main industries include financial services and tourism with latter generating about 4.0Mvisitors per annum.

Transport infrastructure is extensive and includes an international airport, railways, buses and a new tram (street car) link between the airport and city. Due to heavily monitored parking restrictions visitors should avoid driving around the city centre and instead use taxis and/or public transport or just walk.

Edinburgh is essentially a compact city of two halves; the medieval Old Town centred on the Royal Mile and the New Town to the north which dates from the late 18th/early 19th centuries and is famous for it's Georgian style of architecture.

Visitors could consider using the numerous hop-on-hop-off sightseeing buses which offer good value and cover all the main sites.

Key sites to see in Edinburgh.

In the peak, summer season it is best to arrive as soon after the 9.30 am opening as possible as shortly afterwards tour buses arrive and disgorge large numbers of visitors.During three weeks in August each year the Castle's Esplanade (entrance area) is the venue for the very popular, Royal Edinburgh Military Tattoo.

NB: Persons with mobility limitations should contact the castle authorities in advance as a courtesy car is available for transfers into the heart of the Castle.

Crown Square at centre of the Castle. Here can be seen the Scottish Crown Jewels, Great Hall and Royal Apartments. 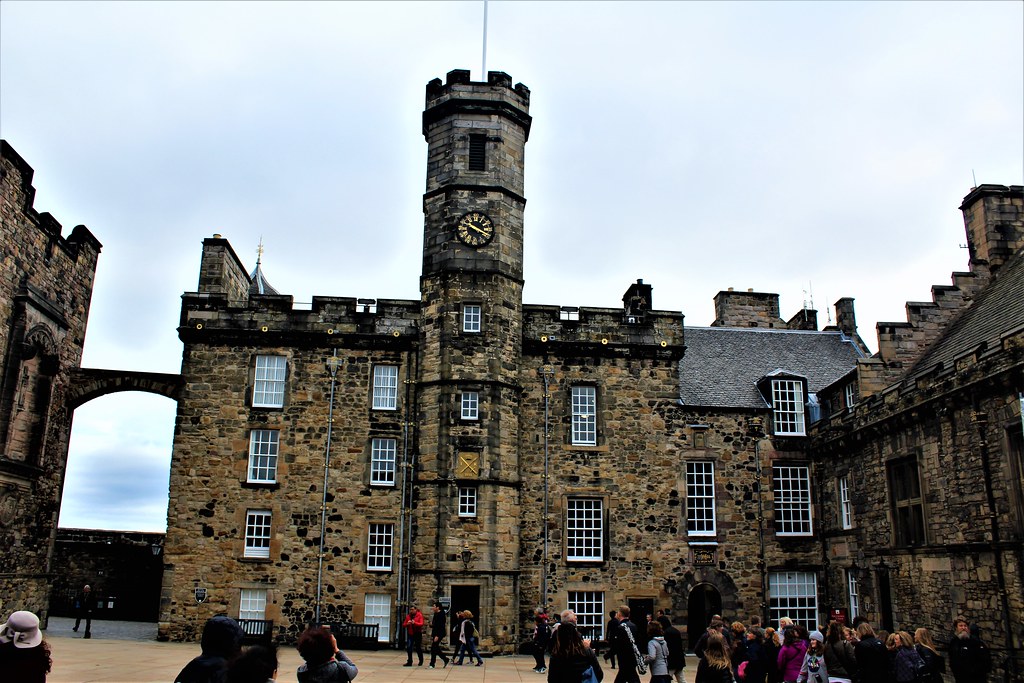 Mons Meg, a fearful weapon of it's day which was gifted to King James II of Scotland by the Duke of Burgandy in 1454. 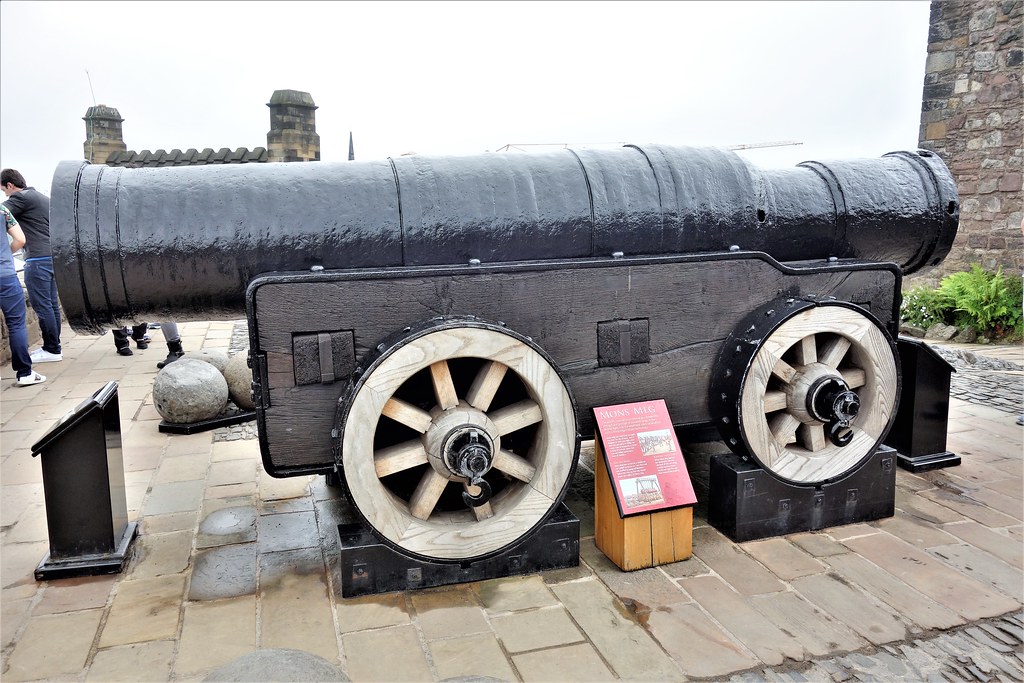 One o'Clock Gun which was originally fired as an aid to navigation for ships in the Port of Leith below. Notwithstanding modern technology, the tradition continues with the firing (by British military) attracting large numbers of visitors at the appointed time each day. 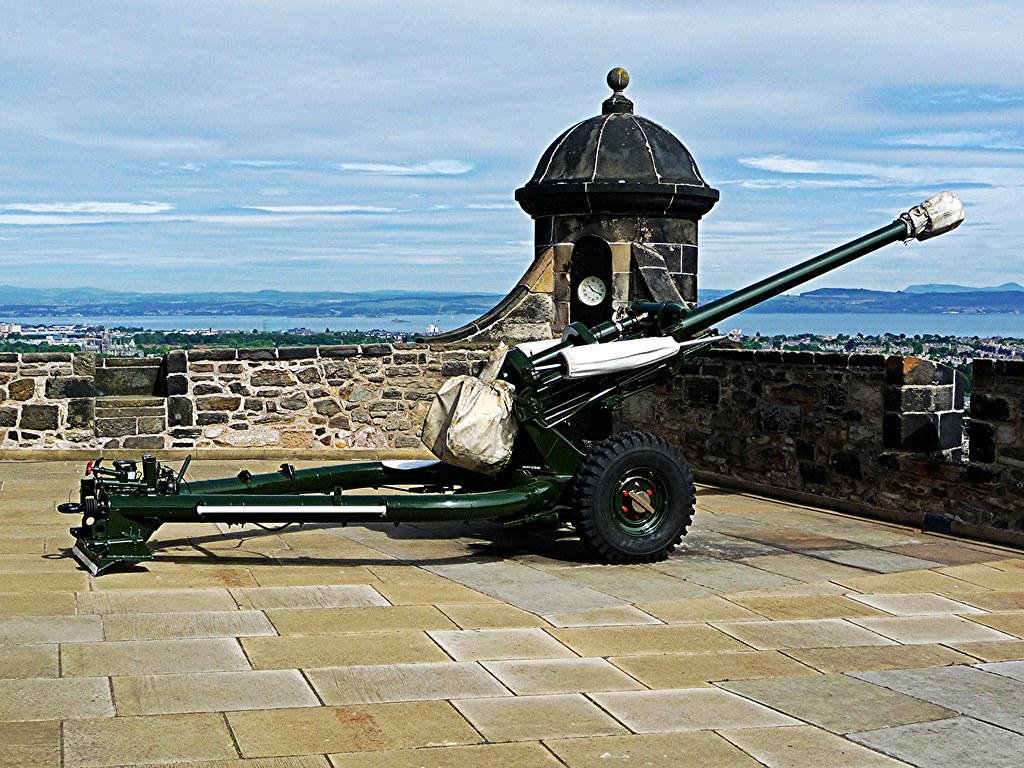 Castle Entrance, via the Esplanade. 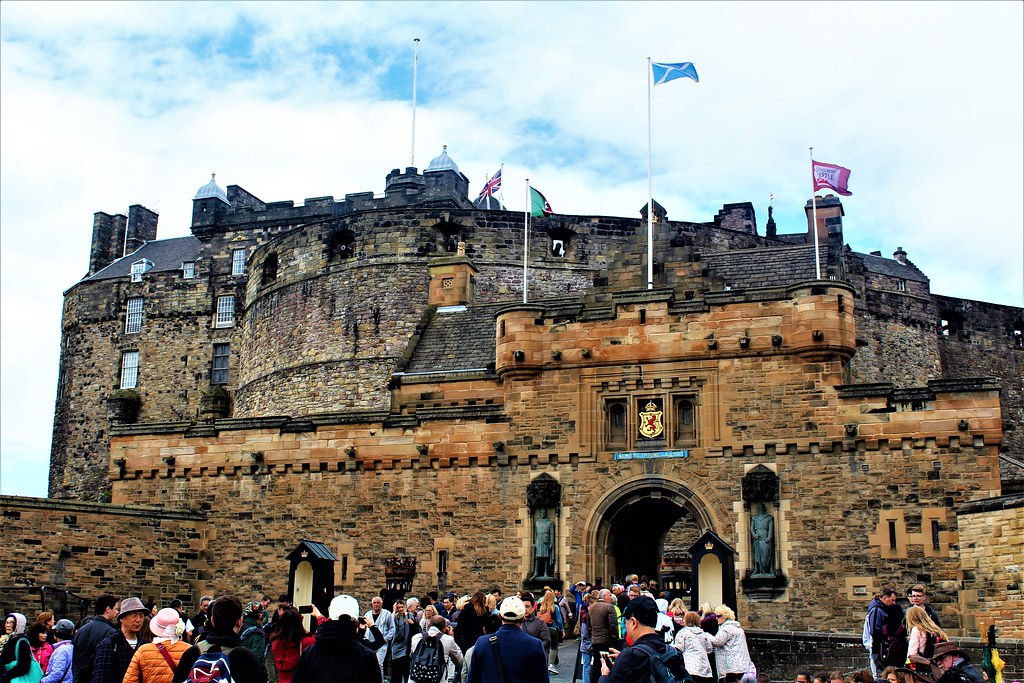 View of Fife Coast, Firth of Forth and Edinburgh from Edinburgh Castle 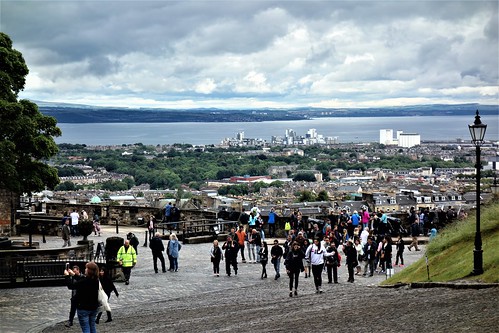 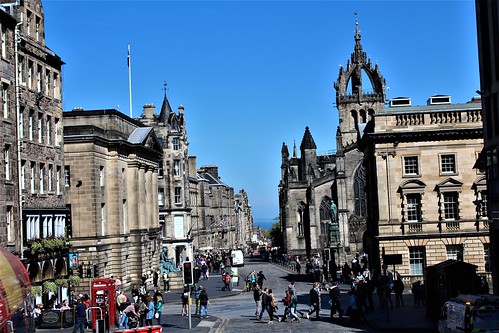 This is the principal thoroughfare through the Old Town with Edinburgh Castle at top and Palace of Holyroodhouse at bottom.Well endowed with tourist shops and retail outlets. Along the Royal Mile can be found St Giles' Cathedral, the Mercat Cross and John Knox House.

St Giles Cathedral. Originally Roman Catholic but now used for Presbyterian worship and correctly known as the High Kirk of Edinburgh. John Knox denounced Mary, Queen of Scots for her Catholicism in this building. Inside, visit the exquisite Thistle Chapel, home to The Most Ancient and Most Noble Order of the Thistle, Scotland's foremost Order of Chivalry. 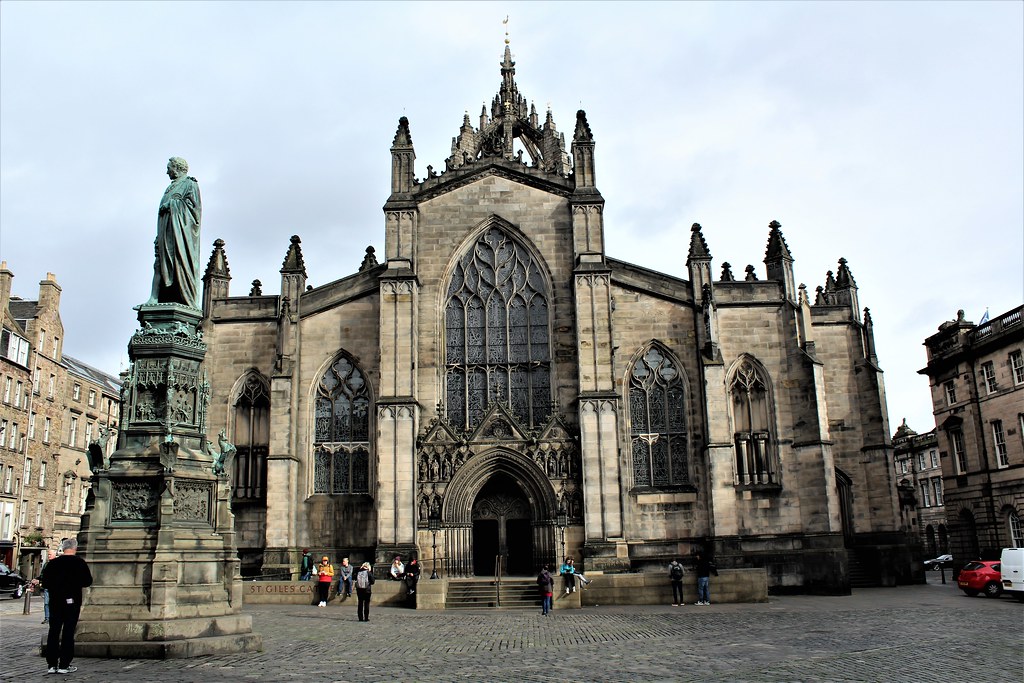 Mercat Cross. This stands in Parliament Square next to St Giles Cathedral, facing the High Street (Royal Mile). In days past this was a meeting place for businessmen and the location from where official proclamations were read out. 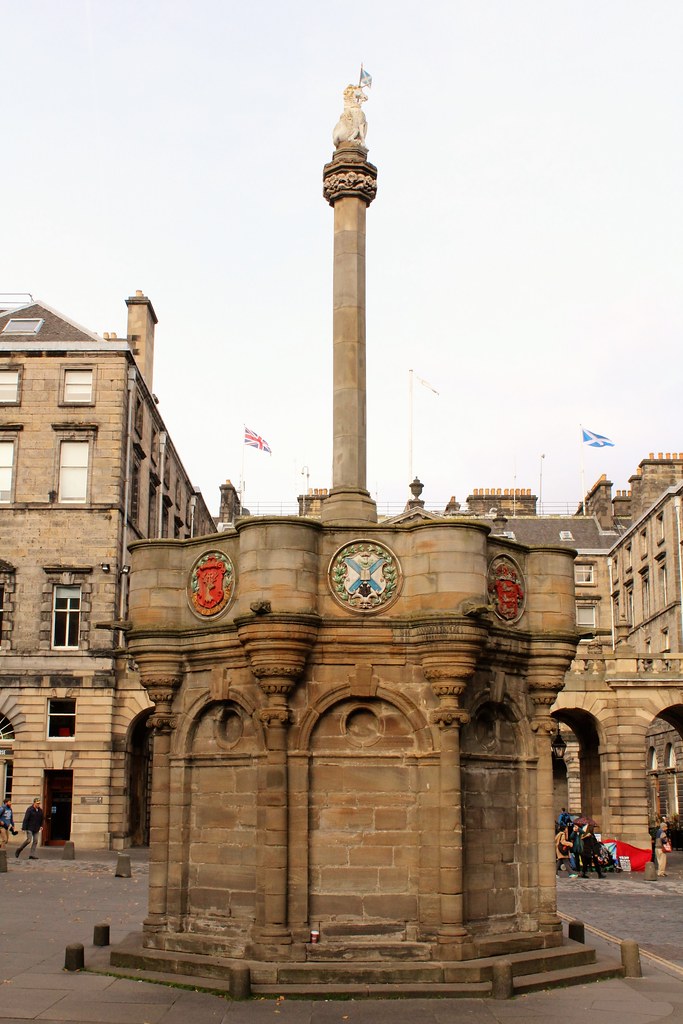 John Knox House, about half way along the Royal Mile. Dates from around 1470-1550 and ranks as one of Edinburgh's oldest houses. Long associated with firebrand Protestant preacher, John Knox (c.1513-1572) but conclusive evidence that he actually lived there is missing. A popular visitor attraction. 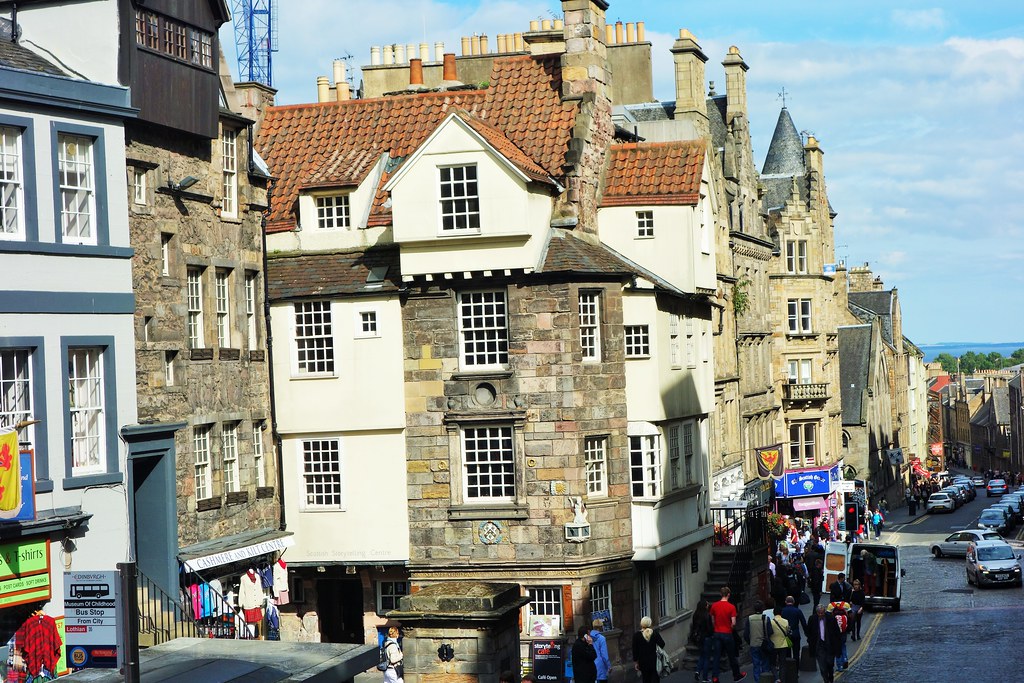 Palace of Holyroodhouse: The official residence of the British monarch in Scotland. Open to visitors most of the year. This building evolved out of a VIP residence attached to the adjacent, and now ruined, medieval abbey. Current building dates from 1671-1678. Visitors use self-guided audio tours. 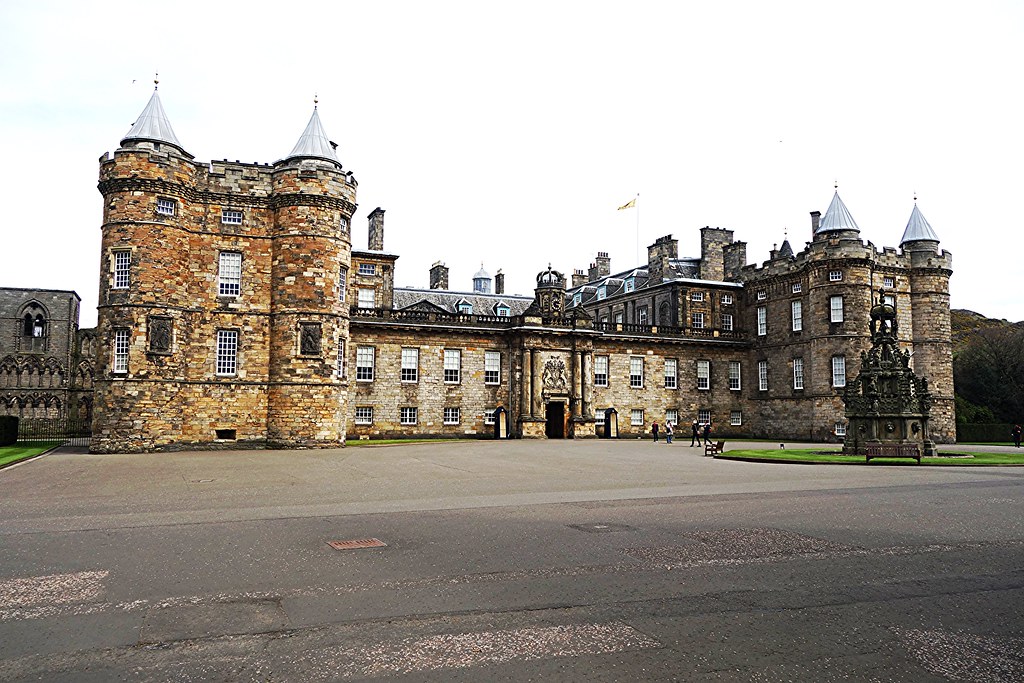 Scottish Parliament: Opposite Palace of Holyroodhouse, at foot of Royal Mile. This was opened in 2004 to house the recently devolved (from Westminster) Scottish Parliament. There is a Visitors Gallery from where debates and business can be observed. 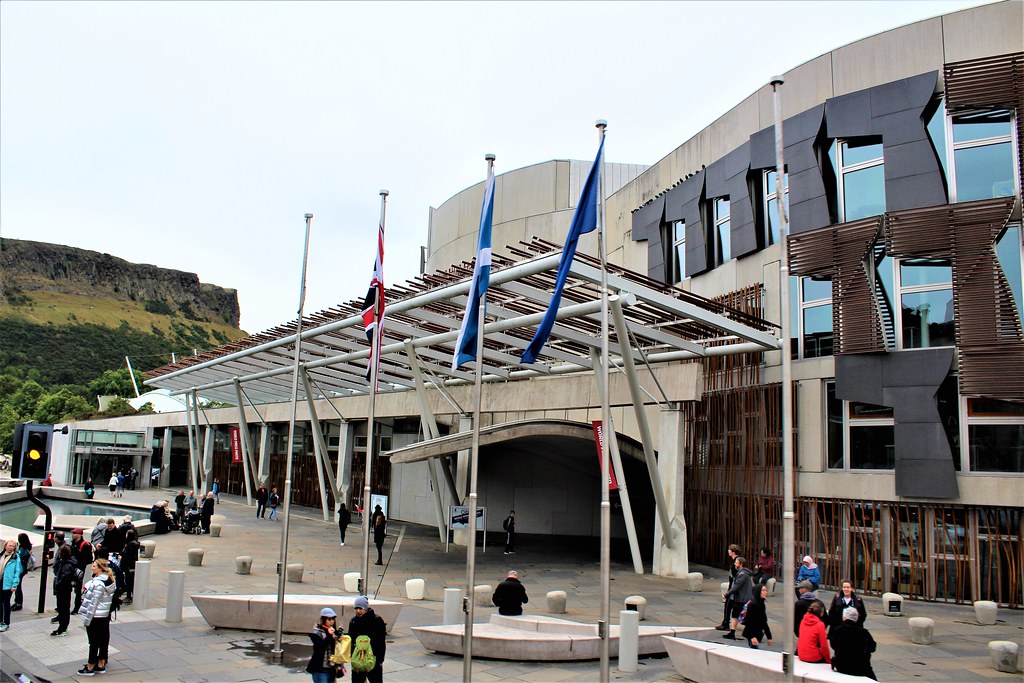 Two of the best sites are George Street (below) and Charlotte Square which sits at the western end of George Street. 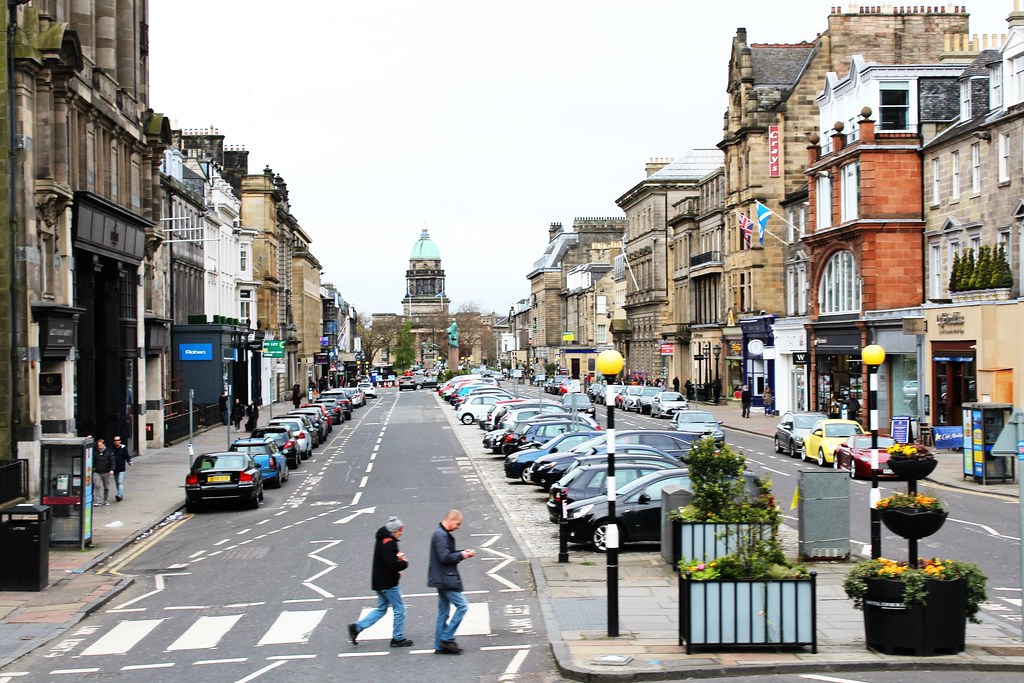 Princes Street: The principal shopping venue which is located in the New Town. 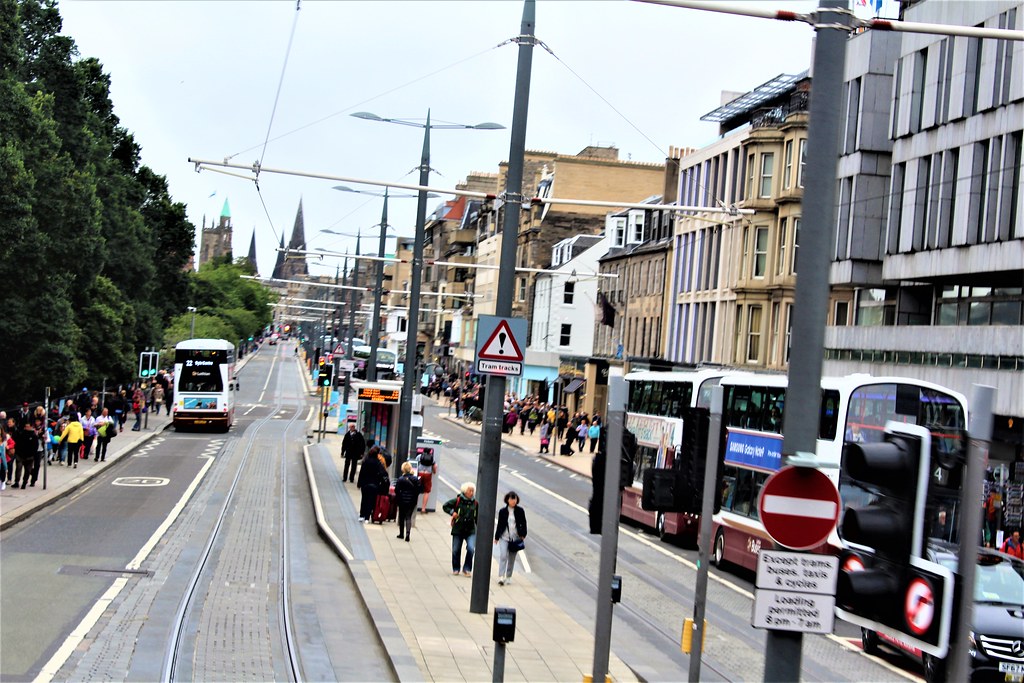 Here can be found a range of monuments and buildings including two old observatories, the National Monument (an incomplete war memorial from the 19th century) and Nelson's Monument (in inverted telescope). This vantage point provides (subject to weather conditions) excellent views of Edinburgh, Leith and the Firth of Forth.To access Calton Hill look out for a flight steps located past the Apex Hotel in Waterloo Place at eastern end of Princes Street. 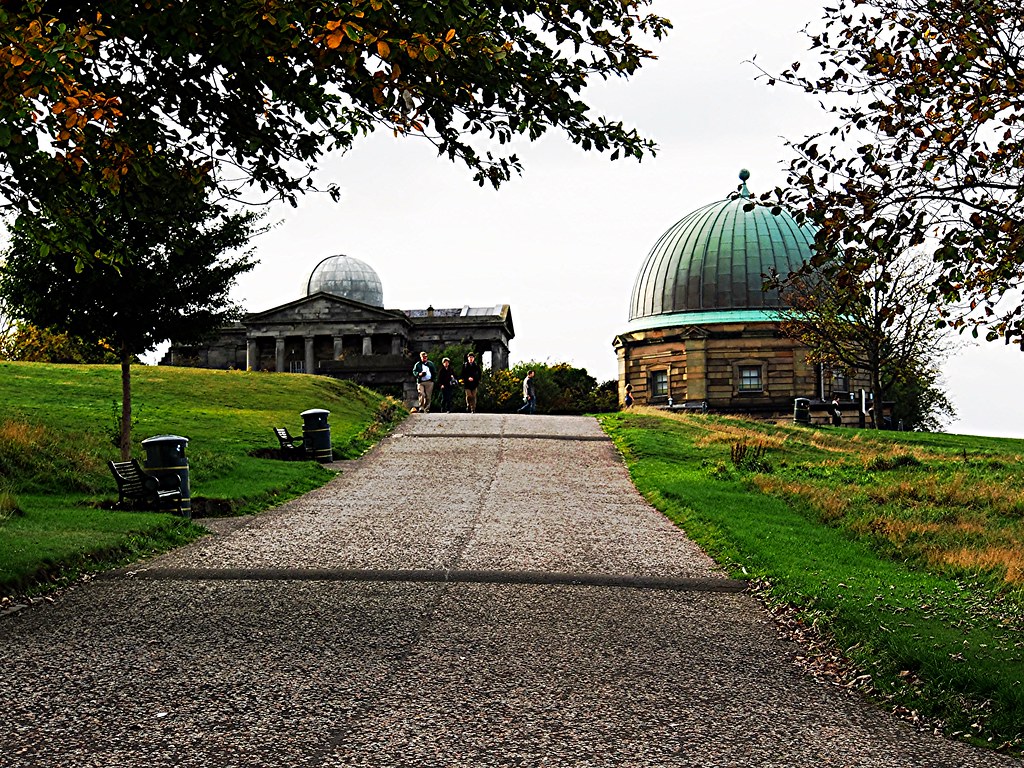 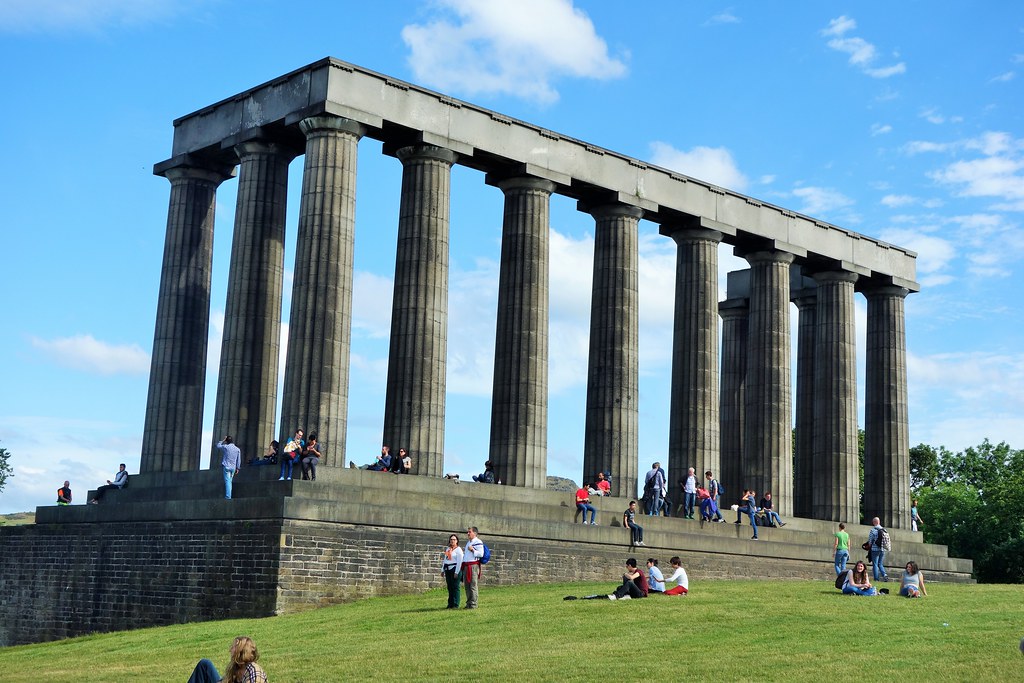 View from Calton Hill of Edinburgh New Town, Leith and Firth of Forth. 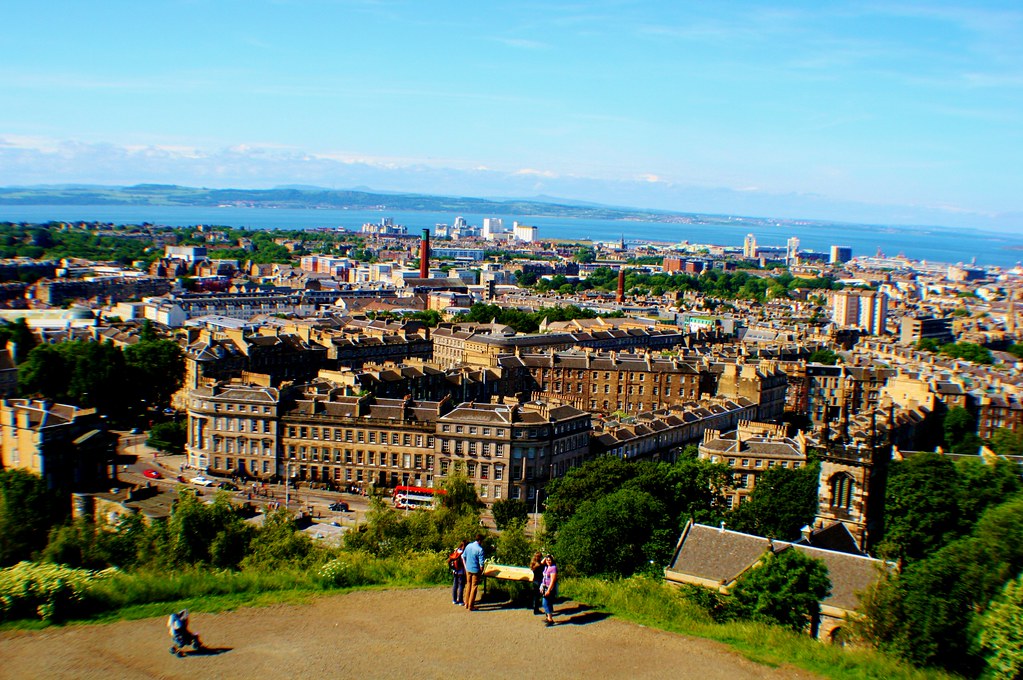 Elephant House Cafe on George IV Bridge, near top of the Royal Mile at right angles to it.

This popular venue is where the Harry Potter stories had their genesis. 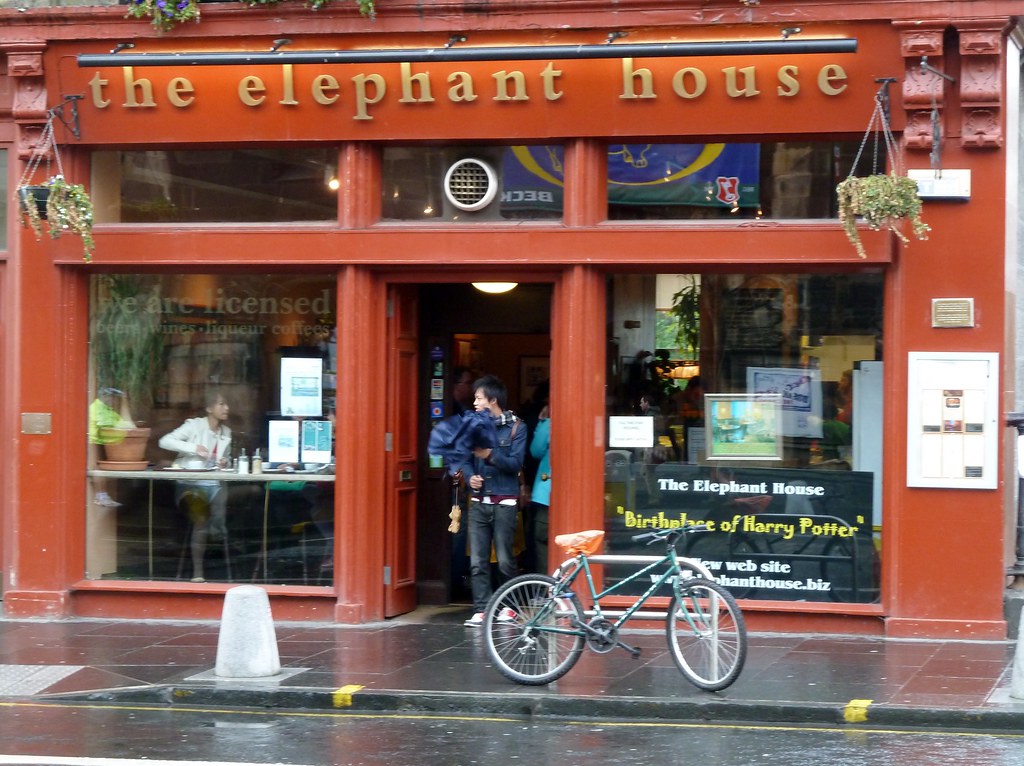 Statue of Greyfriars Bobby
This was  a Skye Terrier around which a story evolved in the 19th century to effect that the dog spent 14 years guarding the grave of his deceased owner in the adjacent burial ground. The statue is located just a short walk, south, of the the Elephant House Cafe on same side of the road. 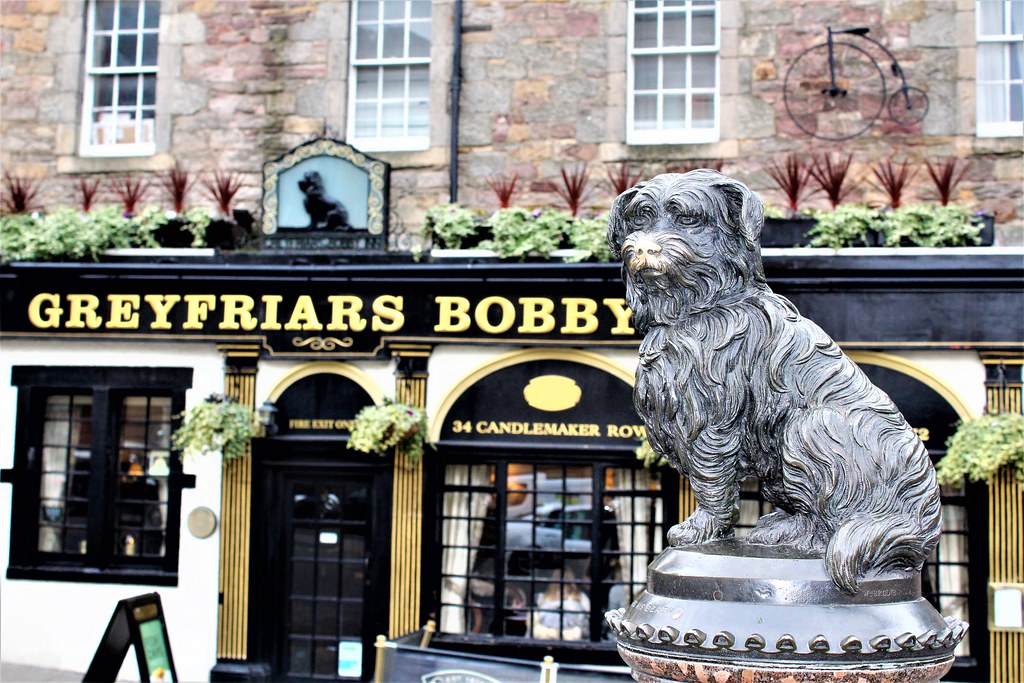 National Museum of Scotland, on Chambers Street,opposite Greyfriars Bobby.
Home to a wealth of information and artefacts spanning thousands of years, from the prehistoric period through to the Industrial Revolution. 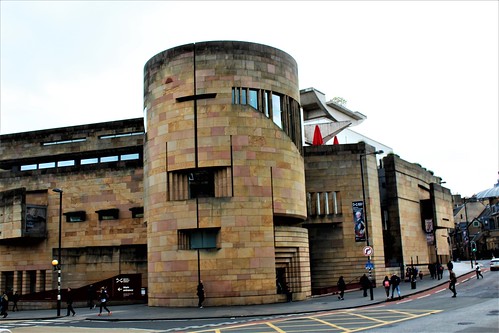 Behind St Giles Cathedral is an equestrian statue. With back to this (and the Cathedral) look diagonally right to a nondescript entrance door. Go through this an indicate to staff desire to visit Old Scottish Parliament. Following a security check visitors will be directed to the Old Parliament chamber which is now used by the legal profession. No photographs are permitted.The parliament which met here was disbanded when, in 1707, Scotland merged with England to form the United Kingdom. 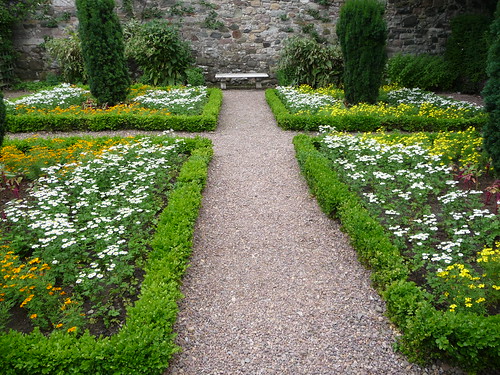 Located at 137 Canongate, in bottom half of Royal Mile on left hand side going down.

This garden has been designed in the style and character of the 17th century. Access is along a narrow, cobbled path which opens into a series of tranquil and elegant parterres of clipped shrubs under a canopy of trees. A quiet spot in which to retire from the 'madding crowds' of the Royal Mile.

At bottom of Royal Mile, beyond Palace of Holyroodhouse and the Scottish Parliament, is Holyrood Park, a hilly, open area which is open to the public. There are two key features here, namely Salisbury Crags and Arthur's Seat both of which have volcanic origins and can be accessed on foot.With benefit of good visibility, persons reaching the summits of these features will be rewarded with excellent views of Edinburgh city and environs. 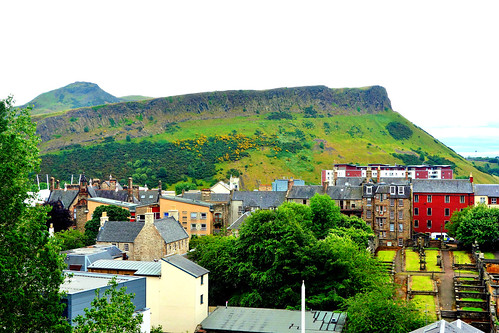 Accommodation: A wide and extensive range is available to suit all budgets. Visitors should book early if they plan to visit during peak months of July through to September.

Shopping: Princes Street for 'regular' merchandise whilst the Royal Mile has an extensive array of shops catering for the tourist market.

Entertainment: Within Edinburgh and Leith are nine theatres. During August the famous Royal Edinburgh Military Tattoo and The Edinburgh Festival Fringe are operational.

Dining: A wide range of venues to suit all diets and budgets are available. Booking ahead is recommended, especially at the higher end establishments during the peak summer season.

Visitor sites within range of Edinburgh