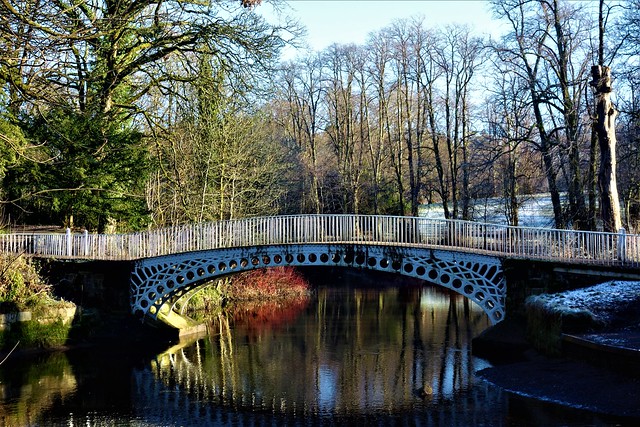 (Above image is a capture of the 'Ha'penny Bridge over the White Cart in Linn Park.)

This morning, I was tempted out by a combination of clear blue skies, low angle sun and frosty conditions.

This report provides images of my hiking/cycle trip along the bank of the White Cart Water (river) at Linn Park in south Glasgow.

First stop was the historic and attractive 'Ha'penny Bridge' information on which has been sourced from Historic Environment Scotland and provided below.


Dates from around 1811-1820. Single-span, ornamental cast iron bridge crossing the White Cart Water at Linn Park, Glasgow.
The bridge is 43 feet long and 12 feet wide with a semi-elliptical depressed arch formed from four iron ribs spaced 4 feet apart and braced by rectangular frames held by bolts with square nuts. Each rib is cast with a decorative Greek frieze, pierced saltire lattice-work, gothic spandrels and distinctive 'ha'penny' roundels.
The bridge has sandstone abutments and simple parapet handrails, also of cast iron. A concrete deck was installed in the 1950s, replacing the 19th century timber deck. The abutments were extended in the 1960s. The southwest abutment was replaced and the bridge restricted to pedestrian use in 2016.
This bridge is an early example of a single-span cast iron bridge in Scotland and is the oldest known complete iron bridge in Glasgow. The distinctive decorative pierced iron work, including Greek and gothic stylistic motifs, give the structure a light and elegant appearance appropriate to its former parkland estate setting.
The design of the bridge is visually distinctive with four ribs with ornamental pierced spans, cast in large sections. The decorative cast iron spandrels, using a number of architectural stylistic motifs including Greek and gothic, run the length of each rib.
No maker's marks are evident on the Linn Park Bridge. While a designer or builder's name is not currently associated with this bridge, the decorative quality and construction suggest that a renowned architect, engineer, or foundry may have been responsible.
Waterfall, about one quarter of a mile downstream of the Ha'penny Bridge. 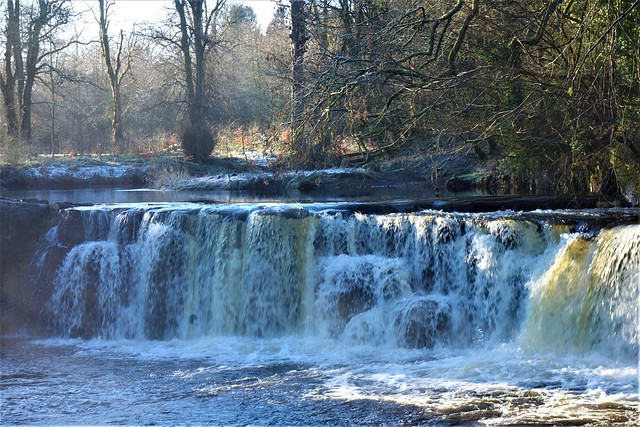 Interesting reflection of the low-angle sun on the White Cart 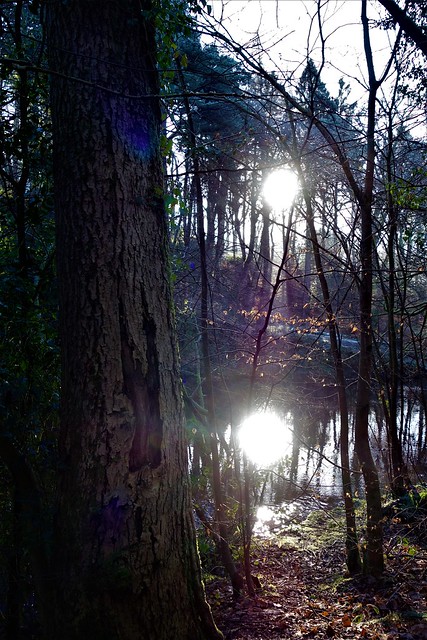 Snuff Mill Bridge.
This bridge dates from around 1725.
On part of the Gorbals to Carmunnock turnpike road, as well as the route to Ayr. Datestone of 1624 incorporated in 18th-century reconstruction. Large masonry single arch, springs from west bank cliff, low single round arch subsidiary span on east side.
The name is derived from the adjacent water-powered mill which had various iterations; firstly a .meal mill in the early-mid18th century, then a cardboard mill in 1812 with a section becoming a snuff mill in 1814. Finally converted to housing in 1990. 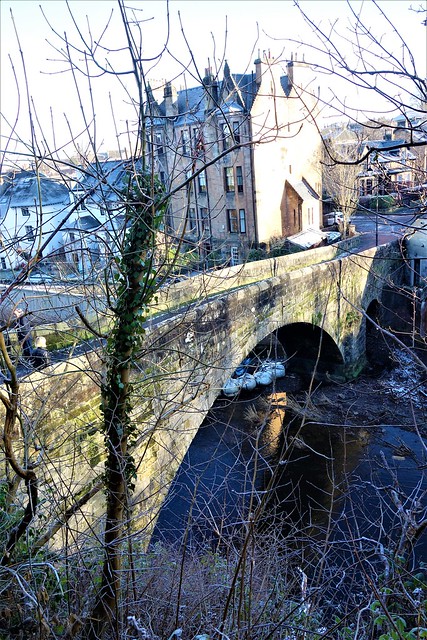