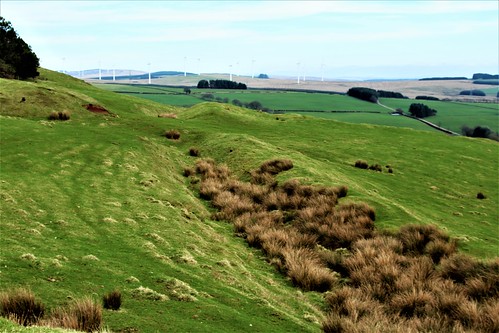 (Image above represents capture of the outer defences of Burnswark South Roman Camp.)

Today, we visited two Roman sites: Burnswark Hill (which lies a couple miles east of Lockerbie in the Scottish Borders region) and Birrens Roman Fort  (Blatobulgium) which is about two miles south of Burnwark.

Lockerbie will be remembered as the site of the terrorist disaster in 1988 when 270 persons died consequent upon an explosion on Pam Am 103.

In viewing the images readers should remember the Roman sites are around 1800 years old and have been subject to depredation of the Scottish climate. The defensive ditches will have been subject to infill due to erosion whilst the defensive earthen banks would, during the Roman era, have been complemented with palisades, maybe six feet high. Remains today represent the basic foundations.

Burnswark Hill has a height of 942 feet and displays a complex archaeological record.
It appears that human occupation of Burnswark dates back to the prehistoric period, possibly to 3000BC. During the Iron Age, which dates from around 800 BC to 43 AD, there appears to have been a ‘fort’ or defended settlement on the hill, such being a common feature all over the British Isles during that period with each assumed to be the power base of a local chieftain or community  leader in context of  tribal society.

The Romans arrived in AD 43 and progressively worked north from what is now southern England reaching as far north as Aberdeen in what is now Scotland. The adversaries of the Romans were local tribes known collectively as Picts (or painted people) who. despite having relatively primitive military technology and tactics, managed to prove worthy opponents of the Romans over a long period.

The Romans undertook various military campaigns in Scotland over the first, second and third centuries AD but failed to conquer and ultimately withdrew to the line of Hadrian’s Wall which ran coast to coast in what is now northern England.

The defining military legacy of the Romans in Scotland is the Antonine Wall, which ran coast to coast spanning a distance of 37 miles and formed the northern frontier of the Roman Empire from AD142   to AD 165.

In addition to the Antonine Wall, the Romans built some forts north of Hadrian’s Wall. Archaeologists have also discovered (with benefit of aerial photography) about 155 temporary camps most of which are in in modern-day Scotland. These camps take the form of rectangles or squares surrounded by a defensive ditch. They were constructed as temporary ‘marching camps’ during military campaigns. Distribution is restricted to the Scottish Borders region, central Scotland and eastern Scotland.

The Roman camps on Burnswark Hill have given rise to much debate. The site is unusual in that there is a camp on each of the north (6.5 acres) and south (12 acres) banks with evidence suggesting they could have been used in siege tactics to take the Pictish site on the hill top. However, sieges did not usually feature in Roman campaigns and there is archaeological evidence in form of multiple spearheads, lead sling-bullets arrow heads and ballista balls to suggest that the two Roman camps may have been used for training purposes. 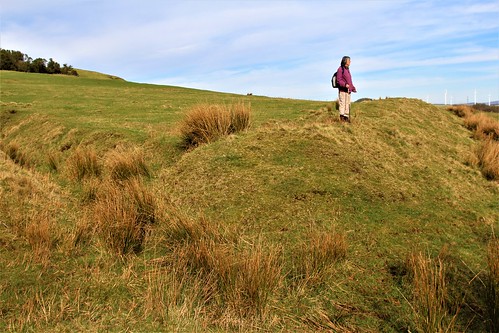 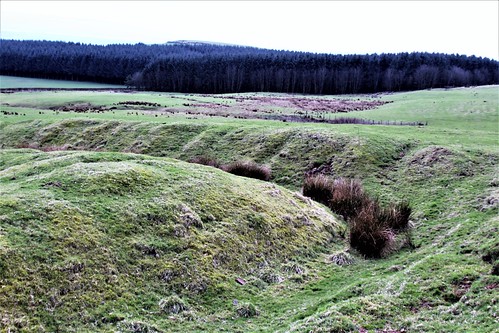 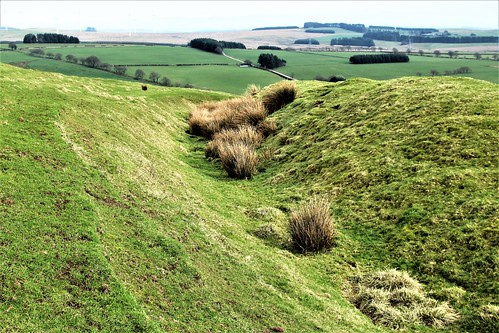 Three mounds at Burnswark South which are believed to have been the platforms for ballista positions. The ballista was a weapon akin to a giant crossbow which was used to launch projectiles at distant targets. 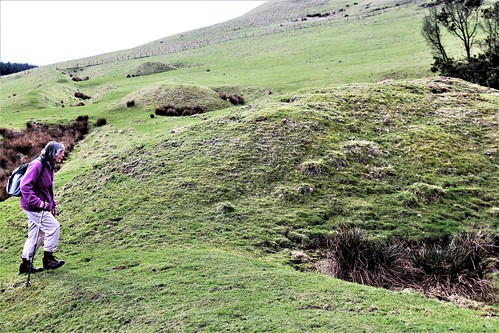 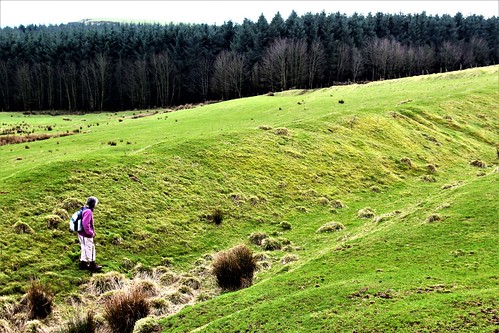 Landscape view south from Burnswark Hill including part of the Roman Camp defences. 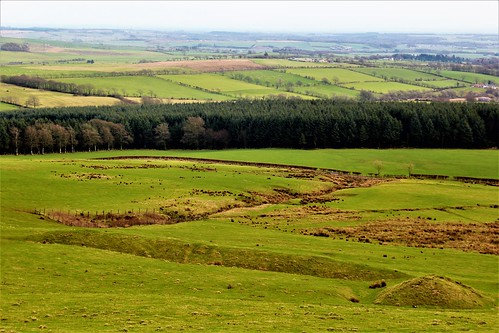 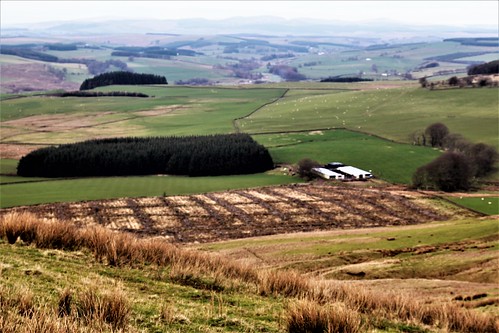 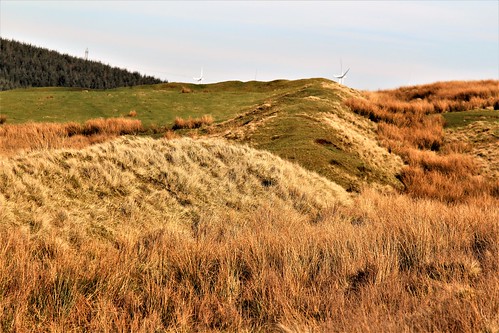 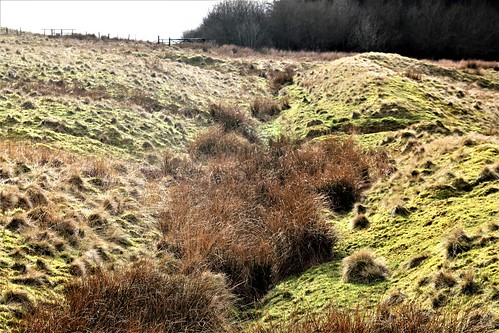 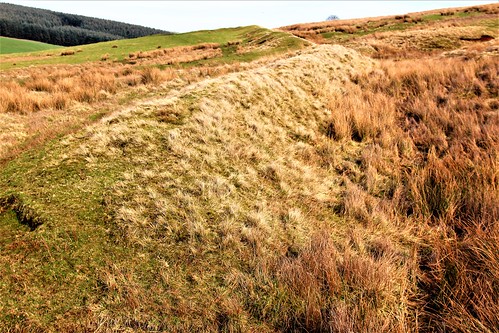 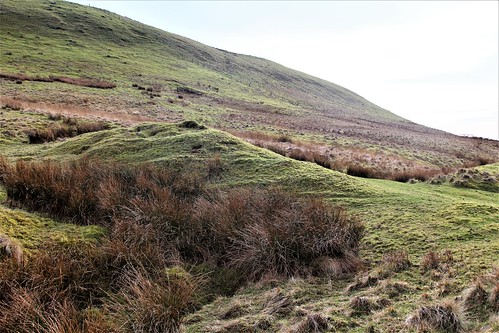 Sunset over the Solway Firth from summit of Burnswark Hill 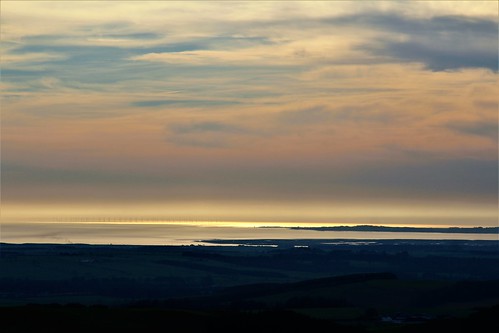 Blatobulgium is recorded in the Antonine Itinerary which is a register of the stations and distances along various Roman roads.. The name derives from Brittonic (Welsh) roots and may mean 'flowery hillock' or 'flowery hollow'. However, as there are granaries at the fort, Blatobulgium may be a nickname meaning 'Flour Sacks'.
The fortress formed the northern terminus of the Roman-era Watling Street, Route 2 of the Antonine Itinerary. It was located in the territory of a tribe named the the Selgovae.
There have been more inscribed and sculptured stones found at Birrens than anywhere else in Scotland. An altar stone dedicated to the Celtic goddess Ricagambeda was found at Birrens.
Interestingly, there is a concentration of Roman military sites at Birrens. In addition to the fort (illustrated) there is evidence of, potentially, three temporary camps. 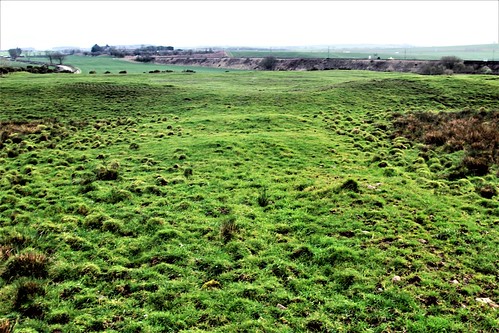 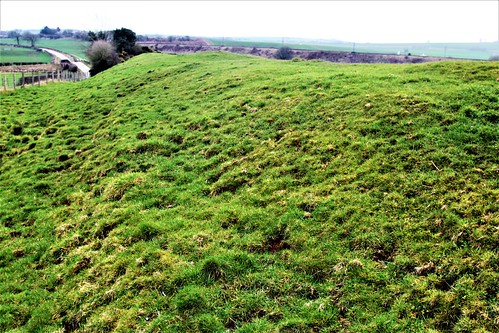 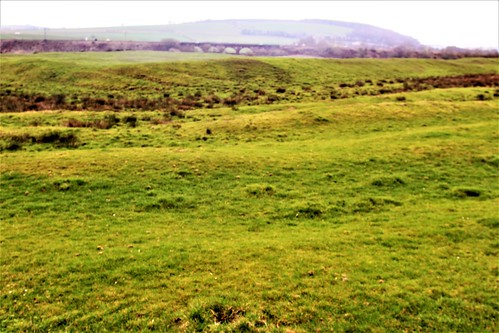