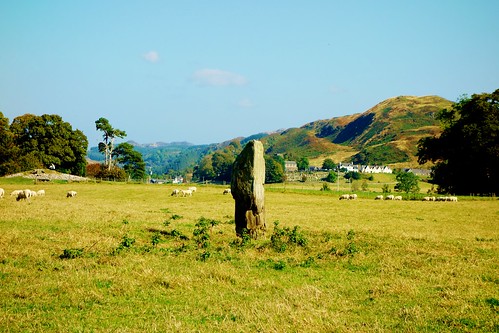 (Above image is a capture of the view north from stones towards Kilmartin village.)
Kilmartin Glen is a very ancient site located about 29 miles south of Oban in the West of Scotland. 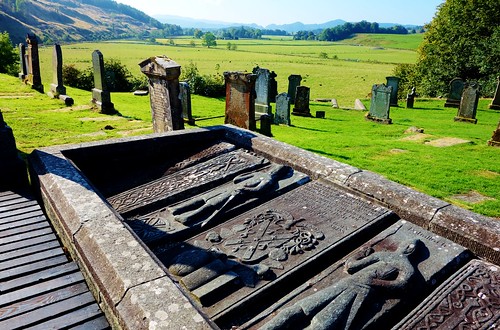 In prehistory, the Kilmartin Glen was evidently of profound significance to the peoples of the time as evidenced by the unusual concentration of more than 150 prehistoric and historic sites which sit within a six mile radius of the Kilmartin village. Collectively, the prehistoric sites form a linear cemetery. At Kilmartin and environs can be found burial cairns, rock-carvings, standing stones, stone circles, medieval castles, ancient grave stones depicting warriors, early Christian crosses, deserted croft houses and the fortress of early Scottish Kings. The local geology and ecology add other dimensions to this fascinating landscape which has been occupied by man since departure of the glaciers some 10,000 years ago.

There is an excellent museum and information centre located in Kilmartin village, close to the church. This is a good place to commence a visit.Refreshments are available.

Like many other Kil-names in the west of Scotland, Kilmartin indicates an early Christian site, probably dating from the 6th, 7th and 8th centuries AD. Kil is linked to the modern word cell. Kilmartin was probably named after a St. Martin.

Here is a summary of the key sites which can be found in and around Kilmartin’s linear prehistoric cemetery which extends for over a mile along the valley floor:-

Glebe Cairn: A burial cairn now comprising a rounded pile of stones and which dates from between 2000 and 1500 BC. 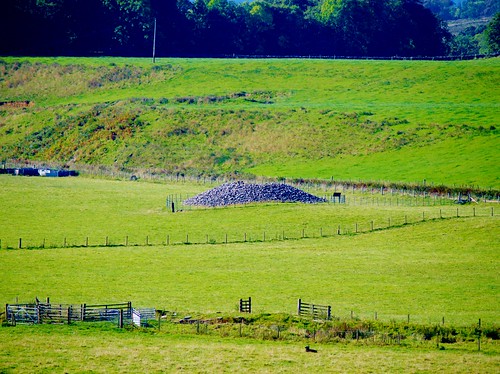 Nether Largie North: A burial cairn which probably dates from between 2000 BC and 1500BC. 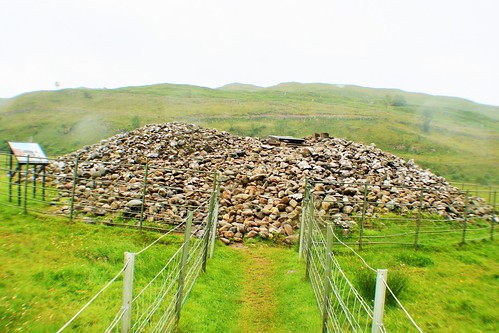 Nether Largie Mid Cairn: The middle cairn of the string of five cairns. The site was excavated in 1929 when two cists were found one of which was decorated with carved axe heads and is still visible. 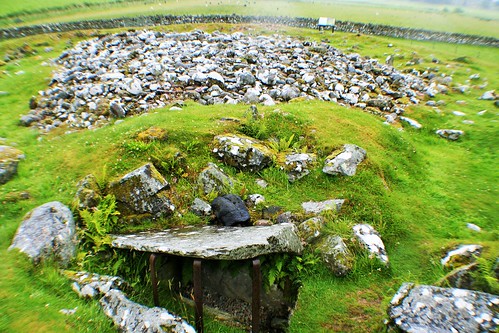 Nether Largie South: This is the only chambered cairn of the linear cemetery and may date to around 3000 BC. Excavation in the 19th century revealed two pots which can be viewed in the Kilmartin Museum. 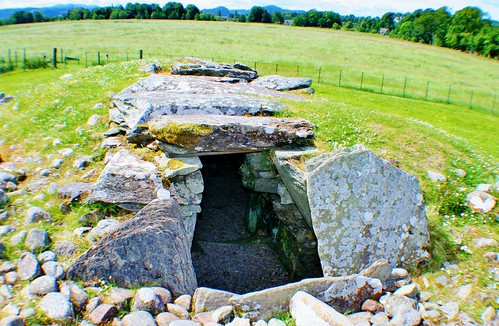 Ri Cruin Cairn: Most southerly of the five cairns and dates from about 2000-1500 BC. This cairn has been subject to no less than three excavations which revealed three cists. Still visible is the carvings of axeheads on one of the slabs.

Temple Wood Stone Circles: In use for a long period commencing around 3500 BC through to about 1050 BC and subject to extensive alteration over the long period of use. There are two circles; the northern structure was originally of wood and then replaced by stone. Another circle was built to the south around 3000 BC. The reconstructed site today shows how the site would have looked in its final phase. 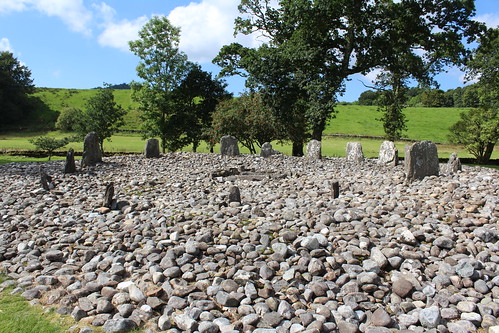 Nether Largie Stones: Located about 250M SE of Temple Wood, this site comprises two pairs of uprights with settings of four and five stones in between. Three of the stones are decorated with carvings. 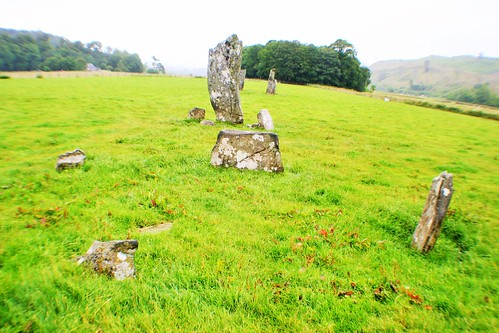 Ballymeanoch Stones: Six standing stones remain of what may originally have been an extensive complex of monuments and earthworks. The stones are arranged in two parallel lines some of which are decorated with cup marks and cup and ring marks. 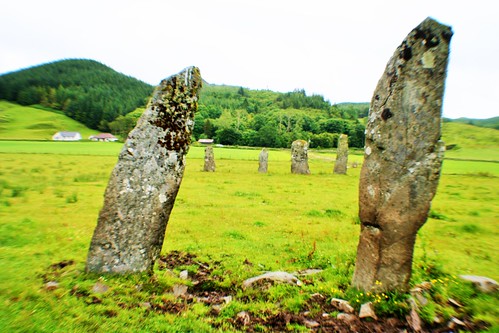 Ballymeanoch Henge:  The only henge monument in the west of Scotland and probably dates from 3,000 BC to 2500 BC. Used for burials until around 2000 BC. Two burial cists were found within the henge. 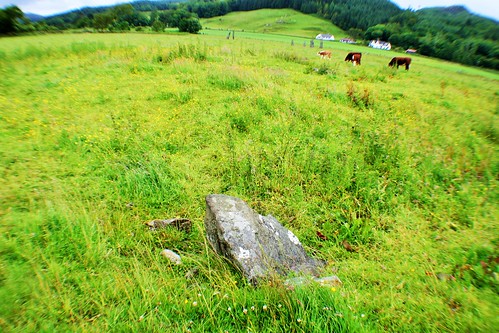 Ballymeanoch Kerb Cairn: Originally circular and now much depleted. May date from around 1300 BC. 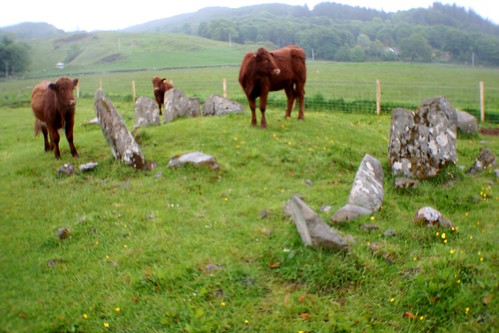 Dunchraigaig Cairn: Used for a mix of burial practices 2000 BC-1500 BC. Excavators recovered two pots which are in the National Museum of Scotland. 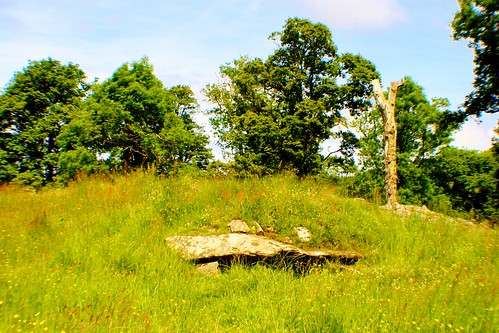 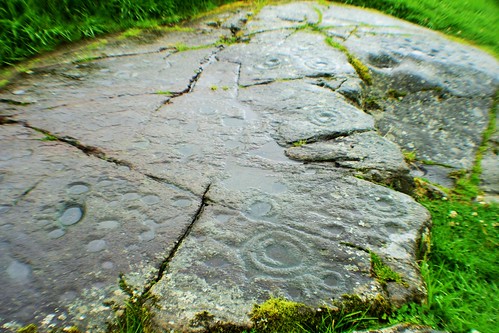 Achnabreck Carvings: Two separate outcrops which comprise the most extensive group of pre-historic carvings in Scotland. The carvings mainly consist of cups and rings. 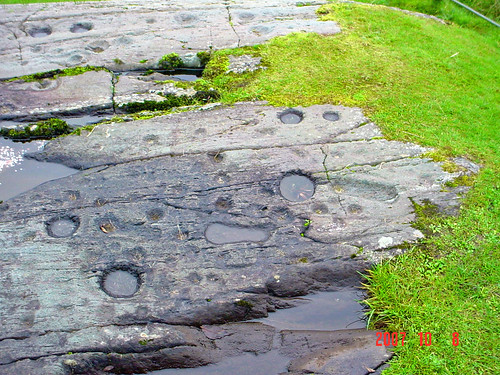 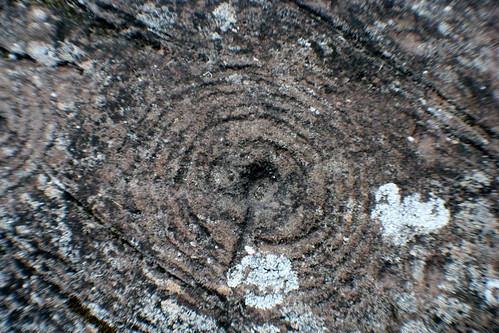 Cairnbaan Carvings: Two groups of prehistoric rock carvings located high on a hill above Cairnbaan.
Ormaig Carvings: Exposed as recently as 1974 and hence the outcrop of rock carvings are well preserved.
Kintraw Standing Stone and Cairn: Two cairns, an enclosure and a 4M high stone. Overlooks Loch Craignish and the Sound of Jura.
Castle Dounie: A dun or fort overlooking the sound of Jura.
Dunadd: Iconic site which stands on a rocky outcrop to the south of Kilmartin Glen. Occupied 5th-10th centuries AD, firstly by the Scottie who came from Ireland and gave their name to Scotland. This was probably a high status power base as evidenced by the archaeological evidence of luxury goods finds. There is also a stone carving of a boar and footprint with the latter possibly used in inauguration ceremonies. Access to the top is via rough path which affords superb views  over the local countryside. 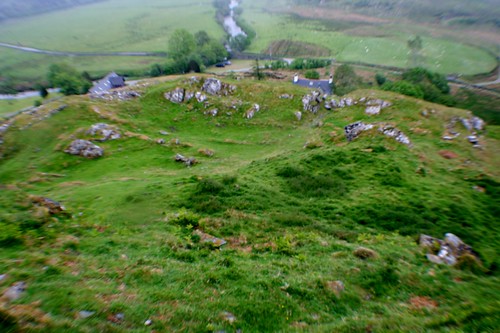 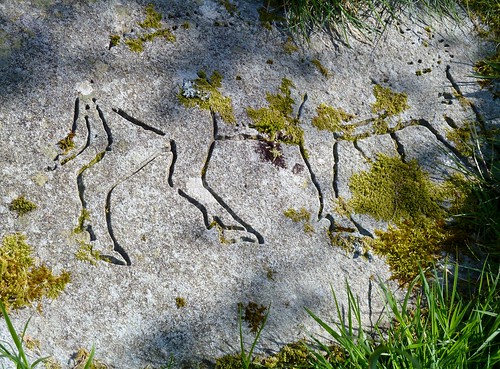 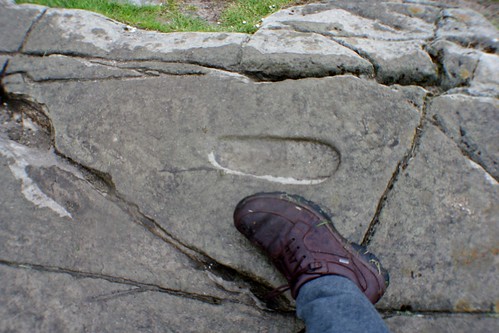 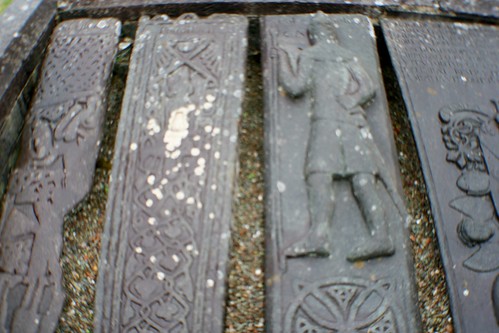 Carnassarie Castle: A romantic ruin dating from the 16th century when it was built for John Carswell, Bishop of the Isles. Suffered extensive hostile action in 1685 and never repaired. Located at northern end of the Glen. 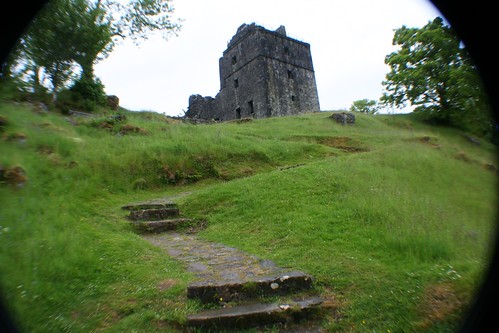 For a general overview to connect with this historic landscape, allow at least one full day and come prepared with waterproof clothing and robust footwear. Farm animals such as sheep and cattle have free range on some of the sites. Start at Kilmartin Museum and the nearby church and then walk down the Glen (valley) visiting the various cairns, stone circles, standing stones and rock carvings. It is possible to access the key sites by car by planning ahead and using official car parks along the road to ‘dip in and out’ of the key sites along the route of the Glen. However, in most cases, a car will be required to access the more remote sites like Achnabreck rock carvings at the southern end of the Glen.