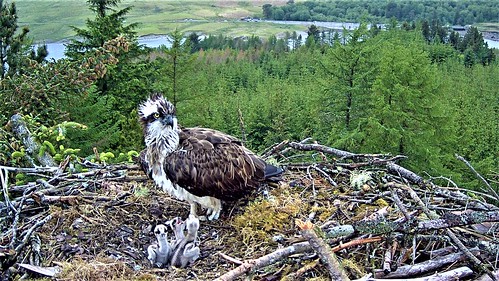 This evening, I am reporting on Ospreys which are a specialised, fish-eating bird of prey, most similar to the buzzards or eagles in general appearance.

The images herein are via a web cam at Loch Doon, Scotland and courtesy of photographer, Roy Robertson. 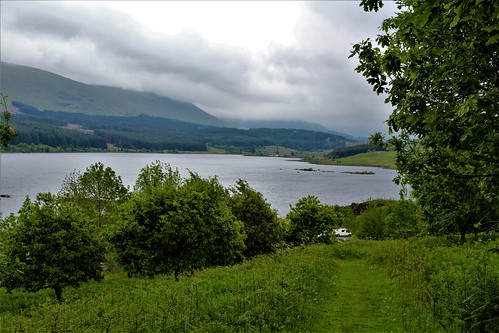 Background (From Royal Society for Protection of Birds ("RSPB") Website)

Ospreys were persecuted into extinction in the UK during the 1800s. They were shot for taxidermy and collectors took their eggs. The last recorded breeding took place in Scotland in 1916 and ospreys also disappeared across much of Europe – reaching a low in the 1920s and ‘30s. It was a combination of good luck and legislation to protect these birds which enabled the osprey population to recover.


The return of the osprey is shrouded in some mystery but in the 1950s birds migrating to Scandinavia began to turn up in Scotland, and the first confirmed breeding was in 1954. The RSPB was involved at the outset trying to protect breeding birds.

In 1958, the birds began breeding at the now famous Loch Garten site in Strathspey, where the RSPB set up Operation Osprey, a 24-hour protection watch. The first attempt failed, but ospreys have returned and bred successfully at this site nearly every year since.

The RSPB bought the Loch Garten site specifically for the conservation of the ospreys and has since acquired the surrounding pinewood, of vital importance for capercaillie and many other UK Biodiversity Action Plan priority species. More than two million people have visited the reserve to see these magnificent birds.

Numbers increased, albeit very slowly, and there are now around 300 nesting pairs in Britain. Since the turn of this century, ospreys have spread south and now breed in England and Wales where the RSPB is involved in projects to protect the birds and enable thousands of visitors to see them.

There is just one species, very widely spread around the world.
Specific Information (from RSPB website)
Ospreys have the following features which are ideal for grasping muscular fish which are caught by diving:
Female feeding chicks. 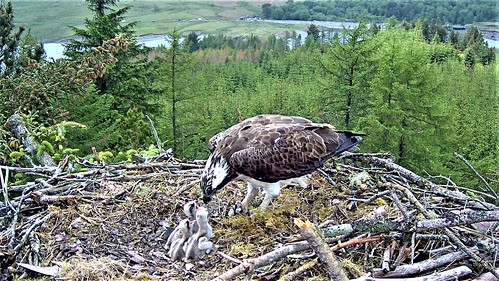