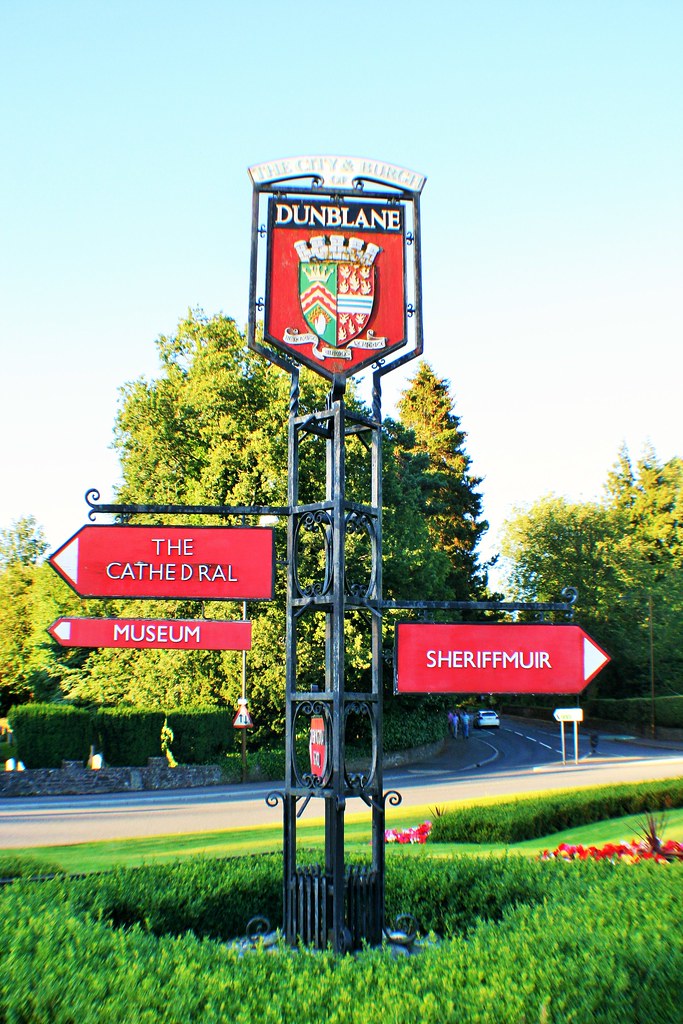 This evening, I am posting information on the town of Dunblane in central Scotland.

Dunblane has a population of about 9,000, roughly one tenth the size of its larger neighbour, Stirling which attracts high volumes of tourists to its famous castle.
In recent times Dunblane has attracted publicity on two accounts:
The name is derived from the Gaelic word dun (meaning hill, mound,fortress or castle) and Blaan (chief monastery of Blaan, Bishop of Kingarth). In essence the town grew up around the impressive medieval Cathedral which still dominates the community.

Whilst Dunblane does not attract mass tourism on the scale of Stirling, the more discerning visitor would appreciate the wide range of historic buildings as illustrated below.
Here is the Dunblane Library which was originally established as the Dunblane Institute and Church Hall in 1907. 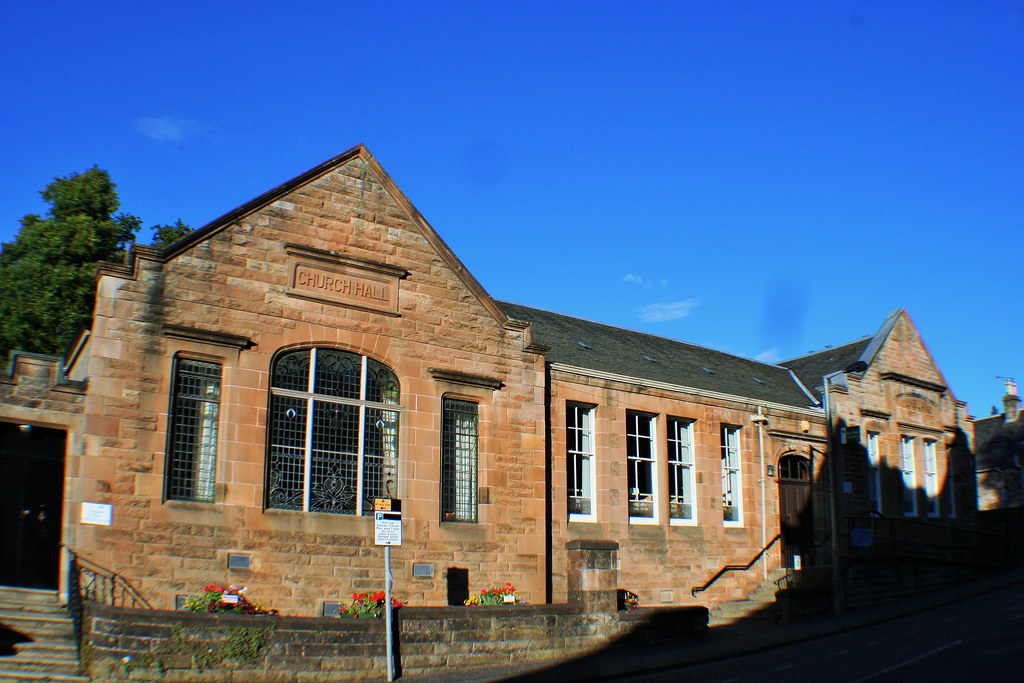 Image below shows St Blane’s Church which dates from 1854. Worship here is Presbyterian under Church of Scotland. 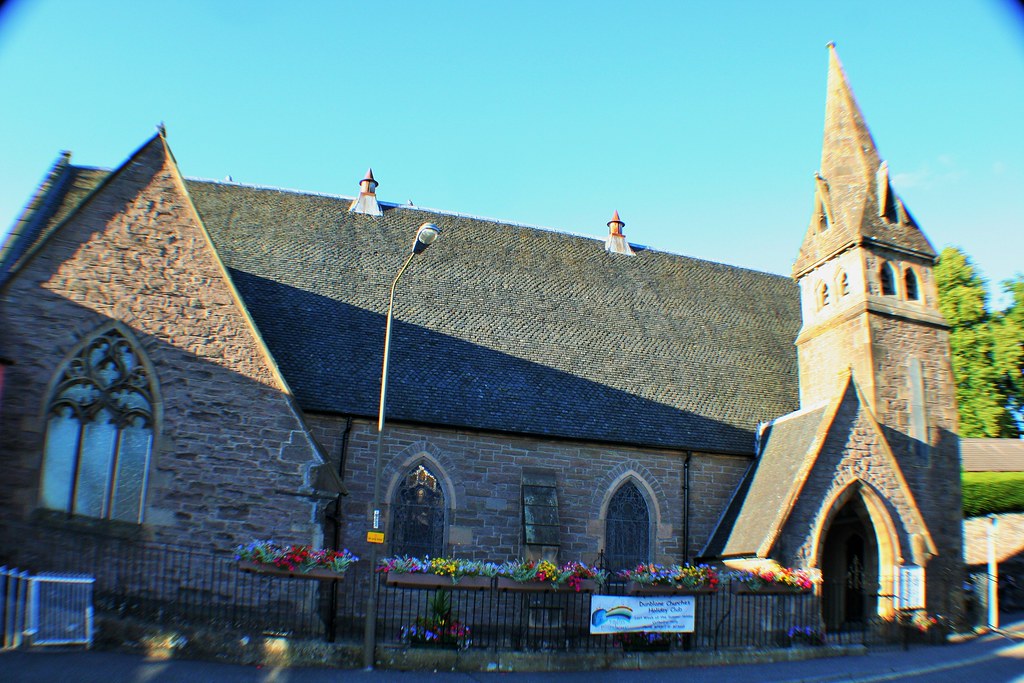 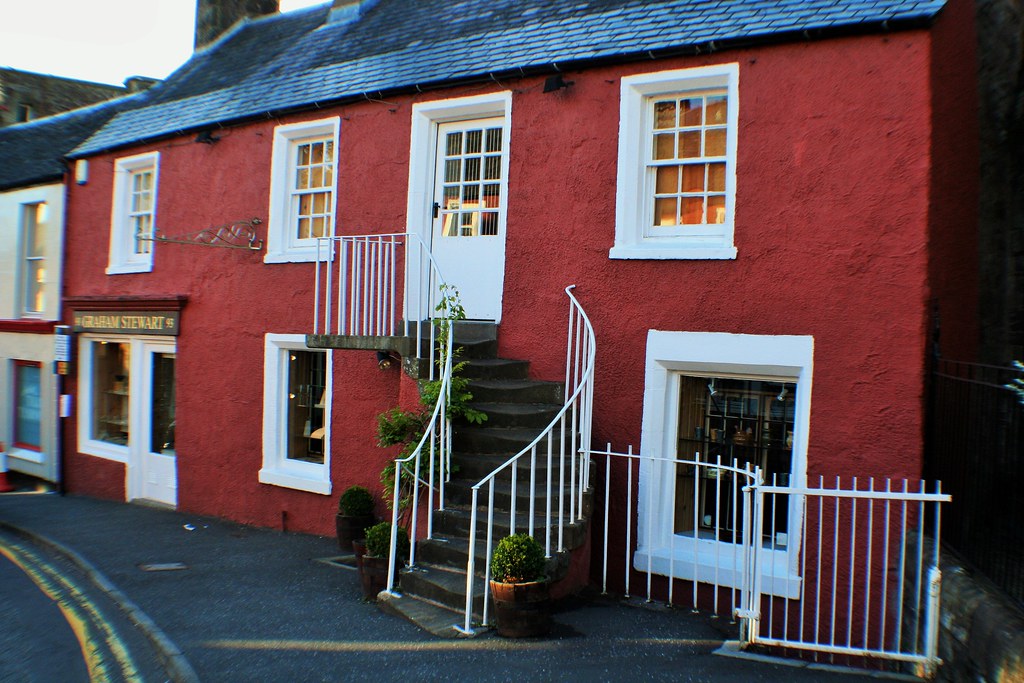 This is the Leighton Library which dates from 1687 and was established by bequest of Robert Leighton, who was Bishop of Dunblane between 1661 and 1670. 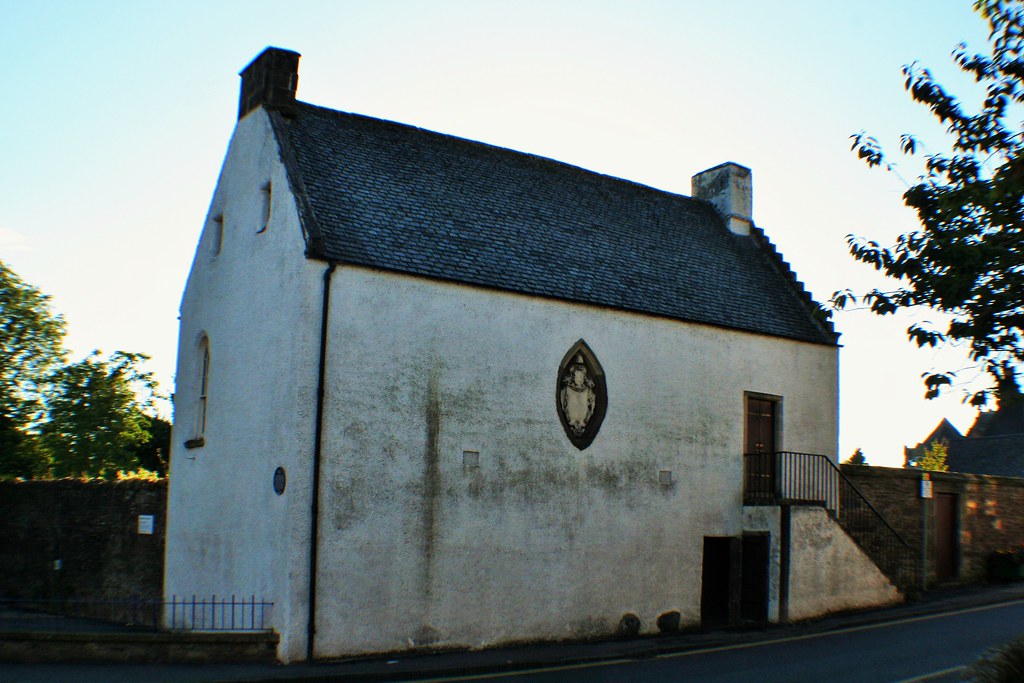 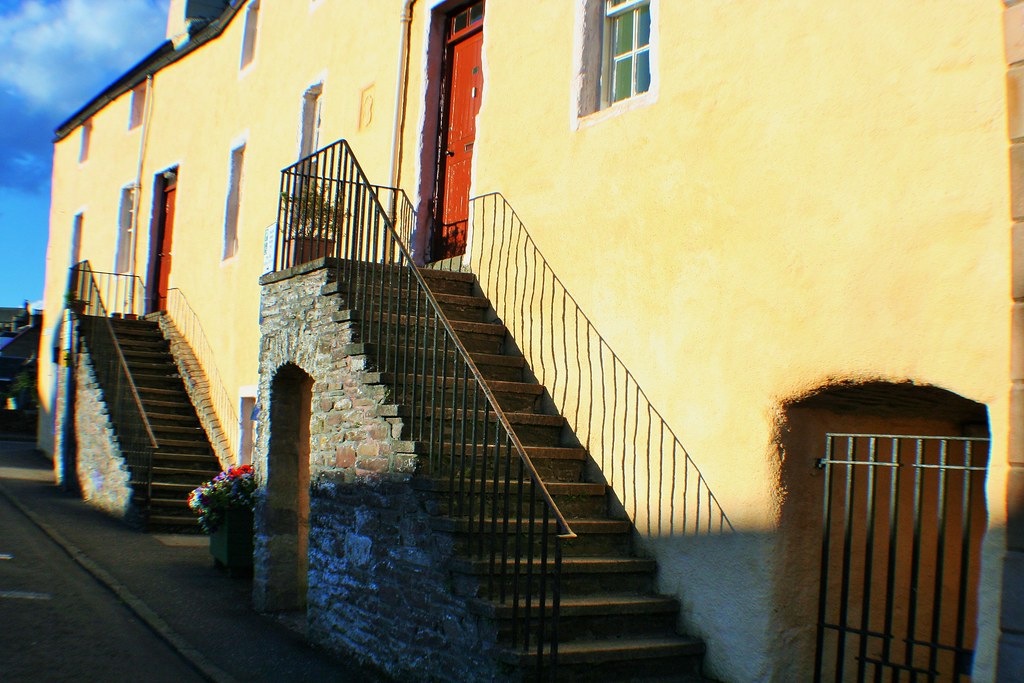 Historic houses in The Cross, Dunblane

Here is the Stirling Arms Hotel. Evidence suggests an inn has occupied this site since the 17th century.Current building dates from 1770. Scotland’s national poet, Robert Burns visited here in 1787. He was subsequently appointed Excise Man ( tax collector) for Dunblane but died before taking up the appointment. 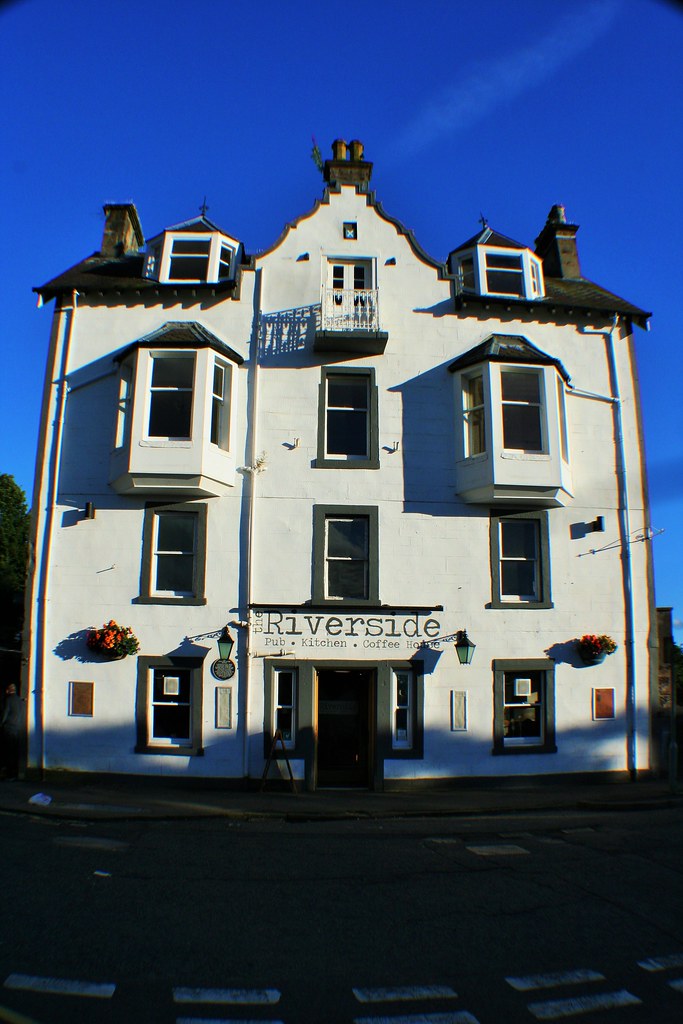 Here is an evening view of Dunblane, with Cathedral in background and Allan Water (river) in foreground. 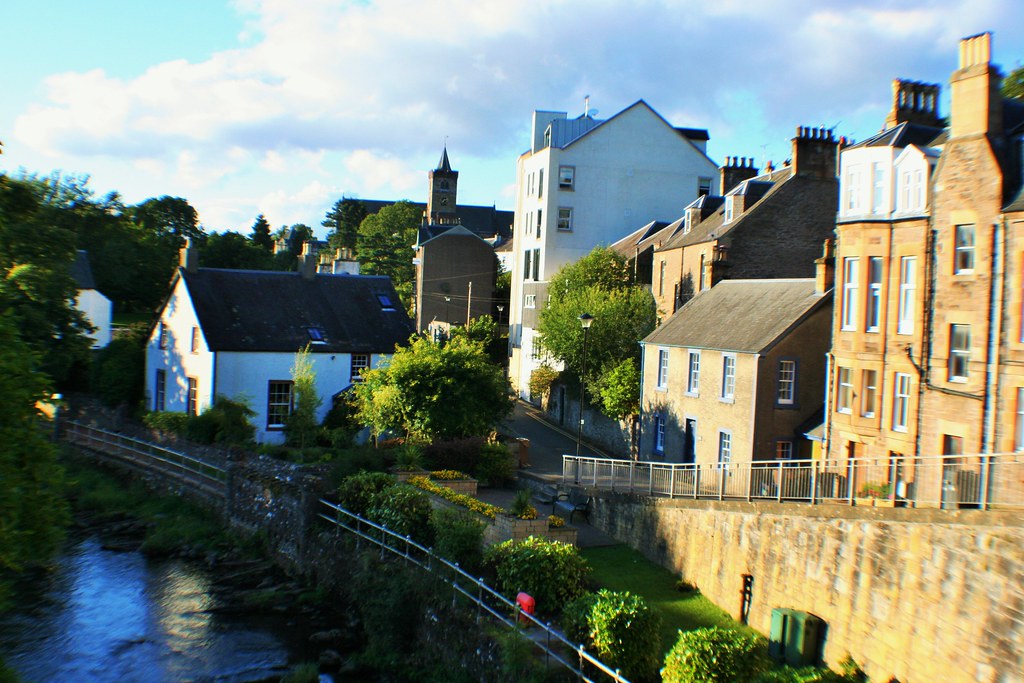 Below is an early 18th century marriage lintel with date and initials of the couple residing at the house. 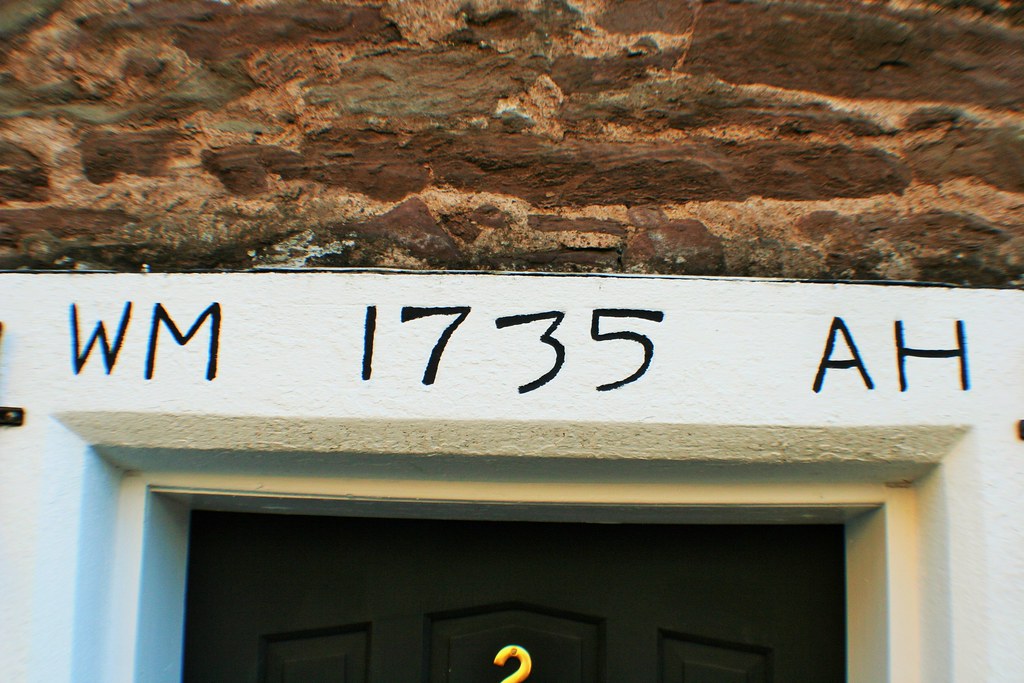 Here is Dunblane Railway Station which opened in 1848. Today, there are frequent services to Glasgow and Edinburgh. 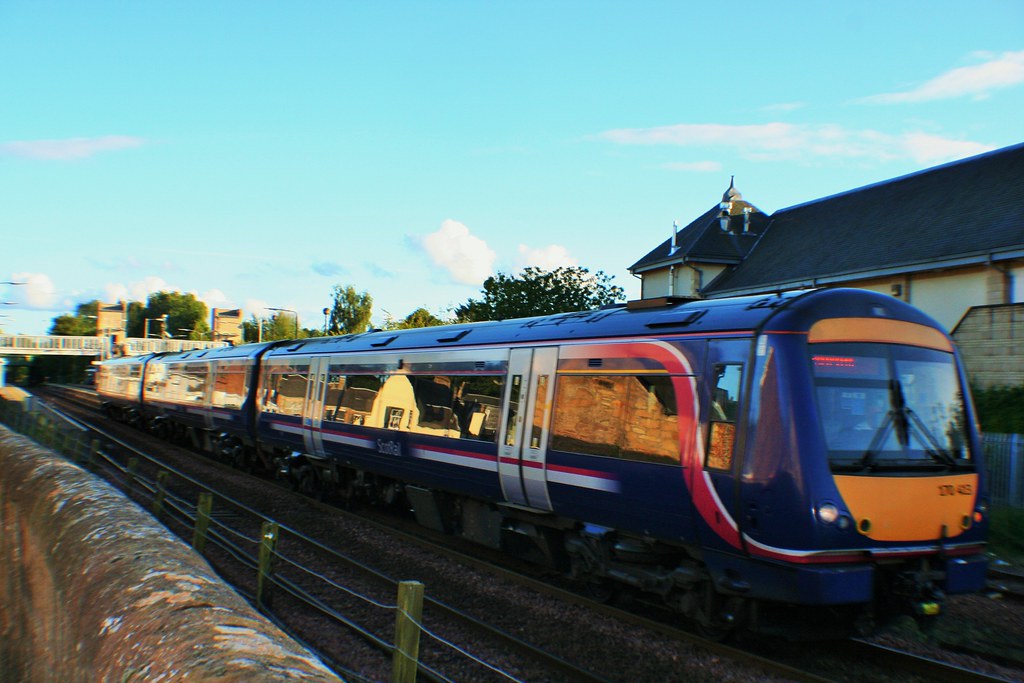 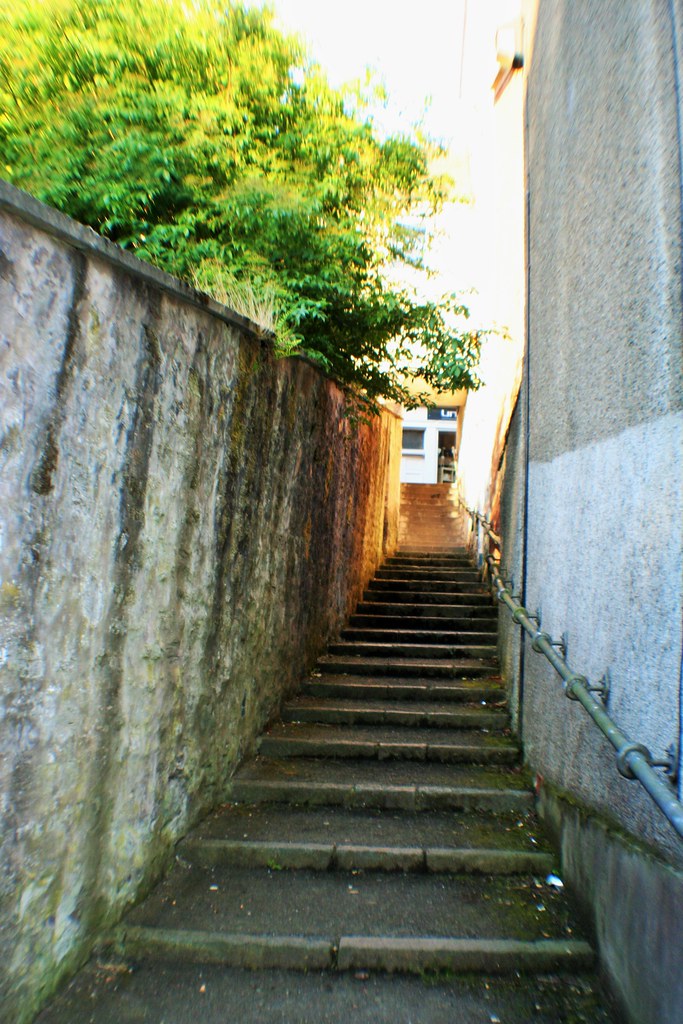 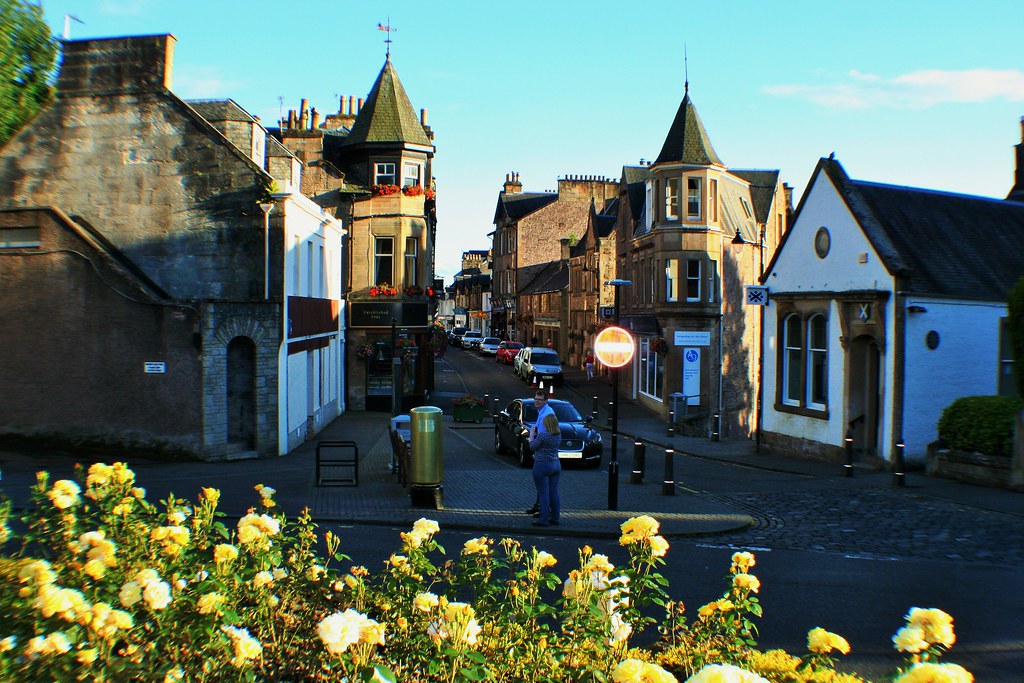 This building dates from 1844 and was the Sheriff Court, gaol and police station. Dunblane was an important legal centre in medieval times. 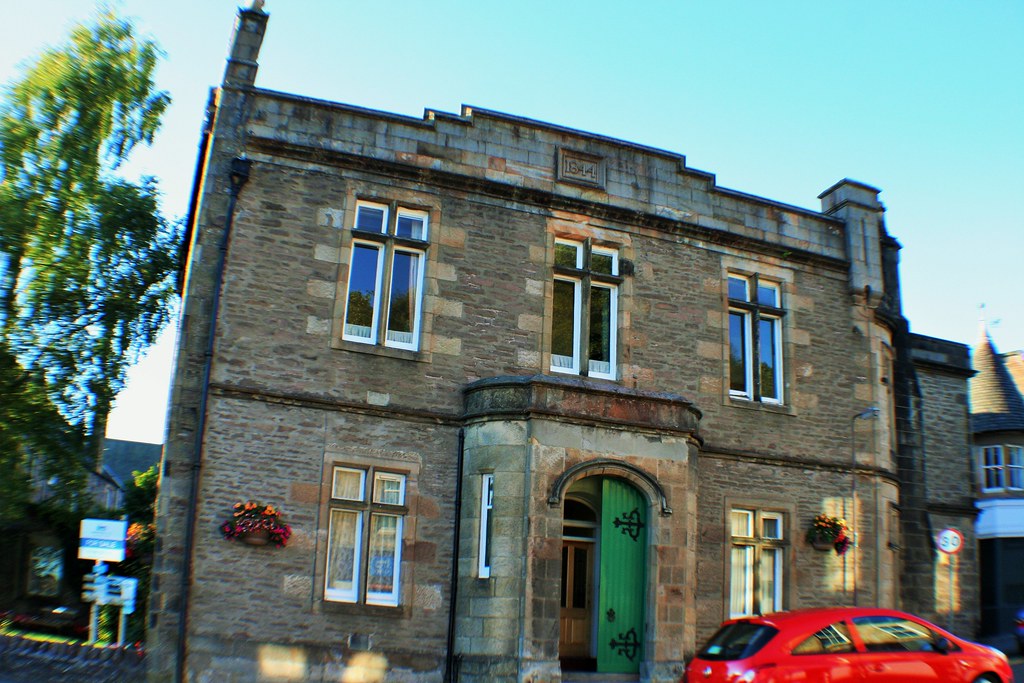 Here is Dunblane Museum, located opposite the Cathedral. 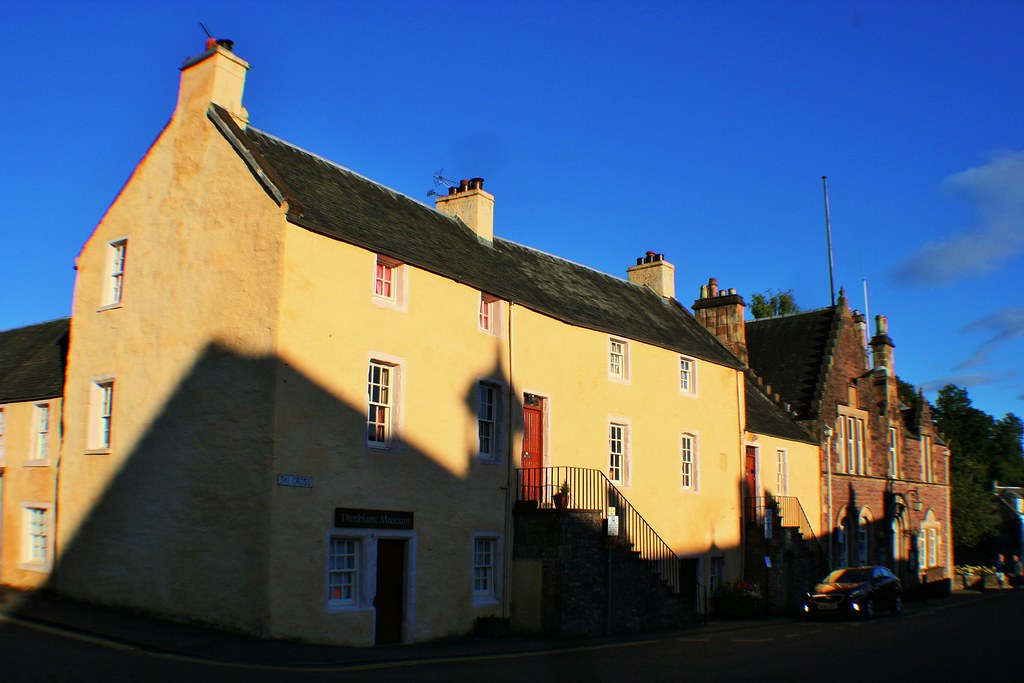 Here is Dunblane Cathedral which dates from the 12th-15th centuries and ranks as one of Scotland’s important medieval churches. Originally Catholic but now Presbyterian. 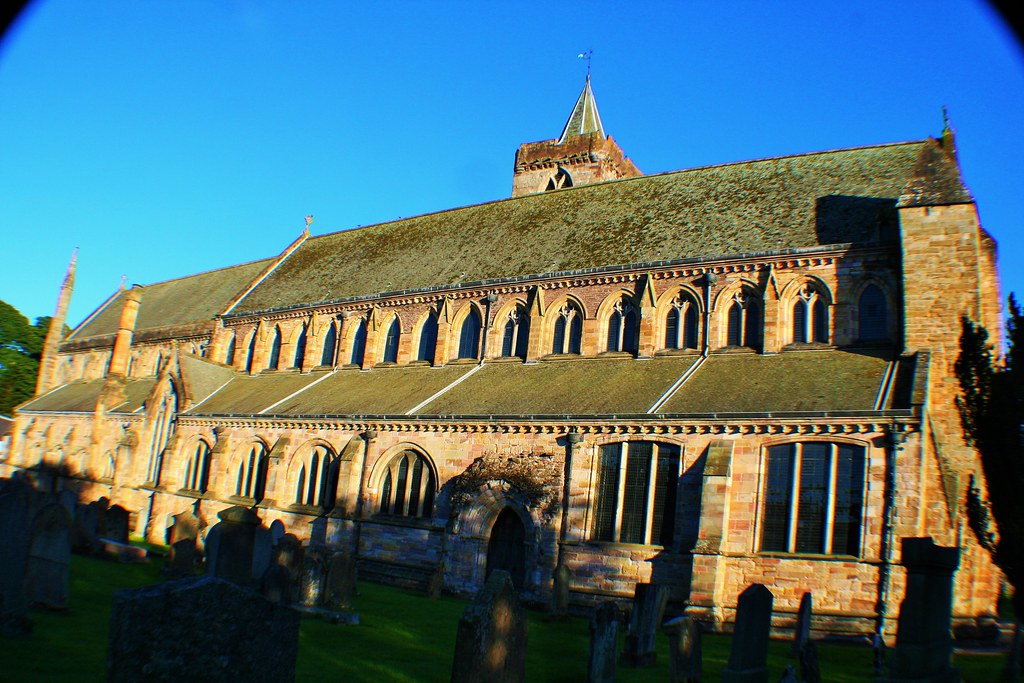 Here is St. Mary’s Episcopal Church which dates from 1845. Location is close to the Fourways roundabout. 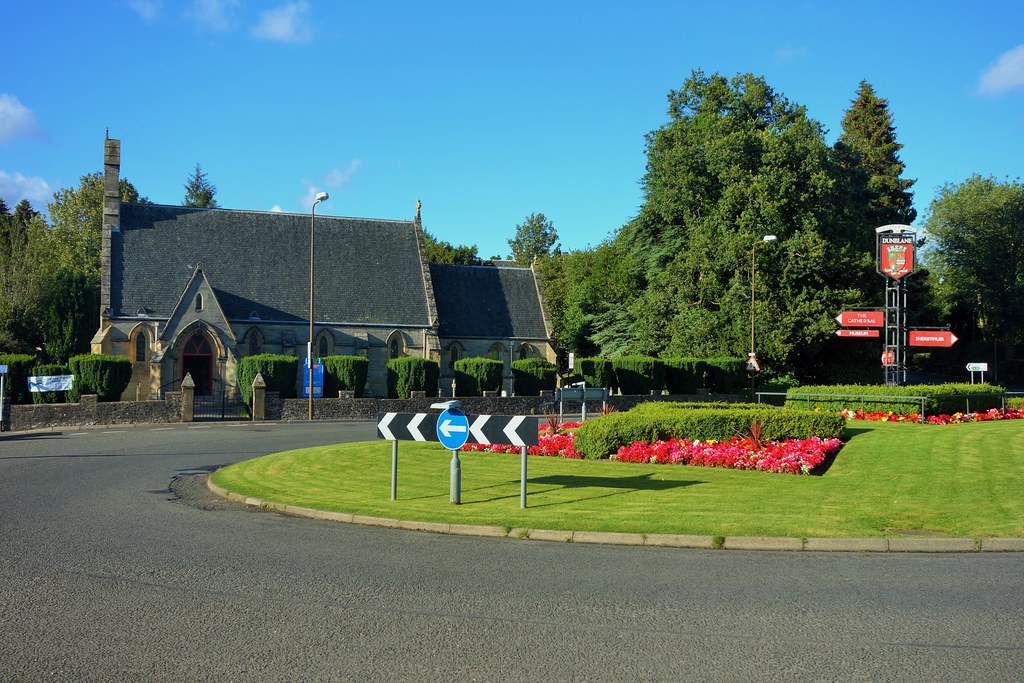 Balhaldie House (below) was the town house of the Drummond family. William Drummond was a Jacobite spy who encouraged rebellion in 1745. Charles  Edward Stuart ( aka ‘Bonnie Prince Charlie’) slept here on night of Sept 11th 1745 en-route to Battle of Prestonpans. 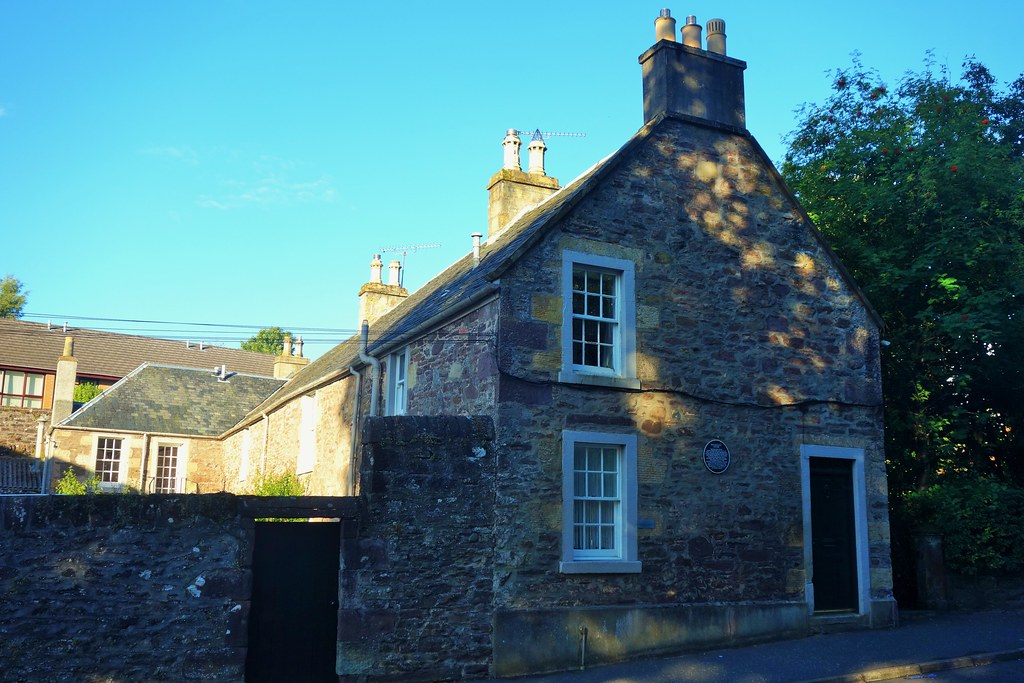