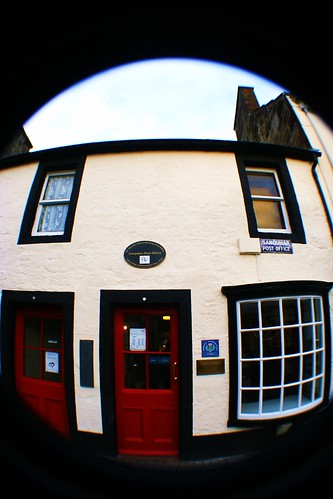 Today's press carries reports of the potential closure of Sanquhar Post Office in Dumfries & Galloway. This establishment was opened in 1712 and has thus been in operation for over 300 years.

Sanquhar is a community of 2000 persons which is located about fifty miles south of Glasgow in S.W. Scotland.

Due to ill health, the present owners, Mansour Alam and his wife Nazra are selling up with a price tag of GBP275K (about USD354,000 today) which includes a three bedroom cottage.

If a purchaser cannot be found then  the Post Office will close on May 31st 2020 and title of world's oldest post office will transfer to Stockholm, Sweden which dates from 1720.

More information on Sanquhar is provided below.

The historic small town of Sanquhar which lies directly south of Glasgow in Upper Nithsdale, Dumfries and Galloway. Directly south is the Scottish Borders region. The area comprising Sanquhar has a long history of human occupation, dating back to Roman times and beyond. An important castle was constructed here in the 12th century. In 1598 King James VI assigned Sanquhar Royal Burgh status.

Starting in the 18th century an array of industries developed including woollen and cotton goods, brick making, iron forging, carpet manufacturing, cheese making and coal mining.Sanquhar is particularly known for elaborately designed knitwear, mainly socks and gloves. Very few of the old activities remain current although the knitwear is available.

Here is the Tolbooth which dates from 1735 which at one time housed the town’s administration and prison.

This is St. Mary’s Street down which rode Mary, Queen of Scots following her defeat at the Battle of Langside in 1568.

Sanquhar’s Post Office dates from 1712 and is recognised as the oldest in the world still in regular use.

This was the Queensberry Arms Inn which Robert Burns frequented when travelling between Ellisland and Mauchline.Burns wrote a few lines on a window pane here.

This archway leads to Baronscourt. In 1745 the Jacobite army lodged in the Close. Later, during the Napoleonic Wars several French Prisoners of War were held here.

This is Gallow’s Close which led directly to a place of execution on the Burgh Muir.

Here are the Town Council Chambers which date from 1814 and were used for council administration purposes from 1926 to 1974. The premises are still used by the Community Council and other organisations.

This is the Cameron Monument, a traditional place of public declaration. In 1680 one Richard Cameron and a small group of armed supporters effectively declared war on King Charles II due to a conflict concerning church governance. Cameron was killed in a subsequent battle with Government Dragoons.

This in Coo Wynd along which the townspeople had a right to move their cattle to a designated pasturage each day. This right was terminated in 1830.

Finally, at the southern end of Sanquhar is the Castle which dates from the 12th century and is now a ruin.

Sanquhar is a fascinating small town, packed full of history and with links to many historical figures.
Sanquhar Post Office