This evening, I am posting information on Dumbuck Crannog which is located in the Firth of Clyde (estuary) near Dumbarton, about twenty-one miles North-West of Glasgow in S.W. Scotland.
Crannogs were high status domestic dwellings unique to Scotland and Ireland during the Iron-Age, about two thousand years ago. The structures were typically circular, made of wood and housed an extended family together with livestock. Crannogs were were built on the beds of lochs (lakes) or rivers, using foundations of either man-made (or natural) islands or wooden piles driven into the bed. Crannogs were usually positioned a few metres offshore to allow access via a short causeway or by boat. For illustration purposes, an image of a reconstructed Crannog on Loch Tay ( central Scotland) is provided at foot of this post.

Key information on the Dumbuck Crannog:-
The remains of at least three other crannogs have been found in the area although Dumbreck is the best preserved.

A fascinating piece of local heritage and of considerable antiquity. I reached the site by parking close to Dumbarton Castle and walking east for about half a mile by following a rough trail which follows the north bank of the Clyde at the high water mark. The site is best photographed using a long lens at low tide. Grid reference is NS4157 7392 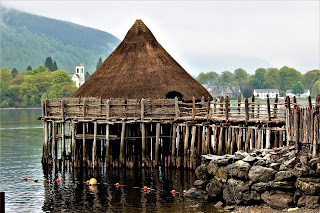