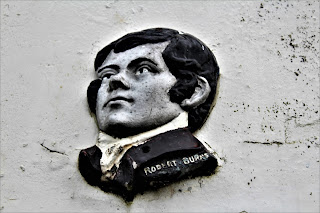 This evening, I am linking with a sister blog which is focused on Glasgow Ancestry (local ancestry and genealogy).

Many people will be familiar with Scotland's National Poet, Robert Burns (1759-1796) , in particular his new year 'anthem' Auld Lang Syne. He also wrote the following poems
Burns was well known for his 'love of the ladies' . In his short life he fathered 12 children by four different mothers including 9 children by his wife, Jean Armour,who he married in 1788, of which 3 survived. During this time period high infant mortality was very common.

My particular interest was on Betty Burns (an illegitimate child) who lived 1791-1873. It appears that Betty's natural mother, Anna Park, died or disappeared when Betty was age two years. Betty was then taken in by Jean Armour and treated as one of her own children. No social services or adoption agencies in those days!

Betty is believed to have had the closest physical likeness to her father of all his offspring.

Betty is buried at Kirk Lane Burial Ground in the midst of medium-density social housing in Glasgow southside.. The original kirk (church) has been demolished leaving the burial ground isolated but accessible. Like many of Scotland's hidden gems, Betty's burial place can be found by the determined but does not benefit from any signage.

The actual marker (below) is horizontal, well worn and partly obscured by a clump of daffodils.


Although born at Leith (Edinburgh), Betty married John Thomson, a soldier and went to live in the Pollokshaws district of Glasgow where she appears to have spent most of her adult life.

There are reports that today there exist about 900 living relatives of Robert Burns.
Robert Burns