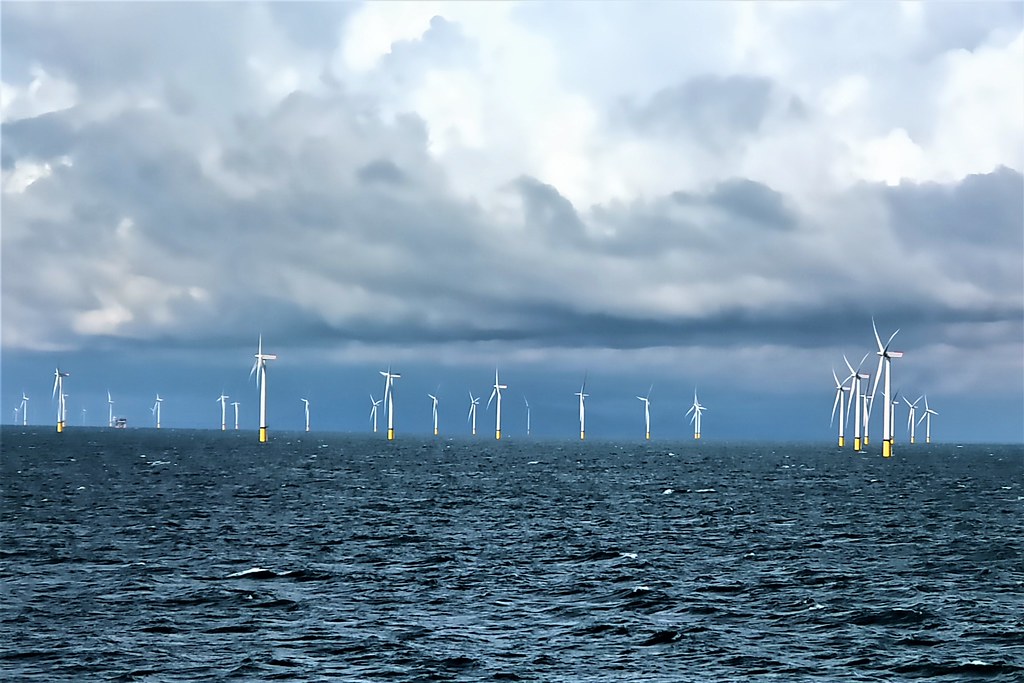 This evening, I am dipping into the topic of renewable energy here in the U.K.

On a recent ferry crossing across the Irish Sea  we passed the massive Walney Wind Farms complex which is situated off the coast of Cumbria in N.W. England. In terms of energy output Walney ranks as the world's second largest offshore windfarm. The image above is just a microcosm of the entire complex.

The U.K. government has set a target of achieving net zero emissions by 2050. Within this target it is envisaged that offshore wind will produce enough electricity to power every home in the country by 2030 based on current electricity usage. Ranking as one of the windiest regions in Europe Britain is well suited to developing wind power as an energy source.

In addition to wind, Britain is able to tap tidal movements.

Britain is, actually, well resourced with fossil fuels such as coal and oil. The former powered the industrial revolution in the 18th and 19th centuries but was shut down for political and economic reasons in the 1980s. There remain extensive oil reserves in the North Sea, off N.E. Scotland.

Neatly coinciding with Britain's hosting of the upcoming COP United Nations Climate Change Conference in Glasgow the U.K. government has to decide on whether to proceed with two controversial fossil fuel developments. These comprise a new specialty coal mine in Cumbria (England) and a massive, 255 million barrel oil development near Shetland (Scotland) known as the Cambo field.

Approving both of the new projects will severely damage the government's green credentials. My guess is the Cumbrian coal project could go ahead because it is relatively modest and produces a specialty coal used to produce specialty steel for the defence industry. However, the oil project is a political minefield. In the Scottish Independence Referendum in 2014 the Scottish National Party ("SNP" ) made great play on the country's extensive oil reserves which would underwrite the Scottish economy. Since then the appeal of oil has been turned on it's head (due to climate change) with the added dimension that the SNP is reliant on Green Party votes to govern. It seems there are pro and anti lobbies for the oil project within the SNP. Look out for some intellectual gymnastics within the SNP hierarchy! However, the final decision rests with the U.K. government in London.