Today, we visited the remote, Waun Mawn stone circle site in S.W. Wales.Purpose of this trip was to  complete understanding of the famous Stonehenge monument in southern England, 220 miles away. New research from Cambridge University has provided a new dimension to the origin and construction of Stonehenge.

The Stonehenge monument (“Stonehenge”) near Salisbury in southern England is recognised throughout the world as the most sophisticated example of stone circle construction from the Neolithic period. Being just one of about four hundred such constructions in the British Isles Stonehenge is neither the oldest nor the largest of its contemporaries, but is certainly the best engineered. 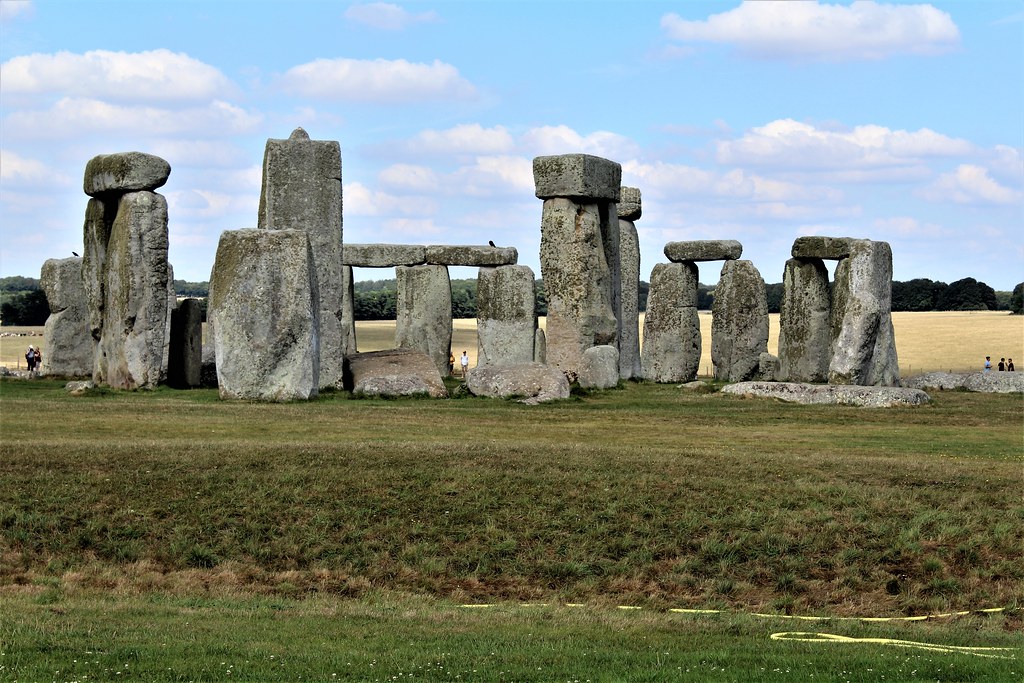 
WHY WAS STONEHENGE BUILT?

We may never know the catalyst for the stone construction but recent advances in geology and archaeology have helped the experts to gain a closer understanding. In particular, interested persons should read the paper entitled “The original Stonehenge? A dismantled stone circle in the Preseli Hills of west Wales” published by Cambridge University Press on February 12th 2021. (Most of the information in this post was sourced from the C.U.P. paper.) 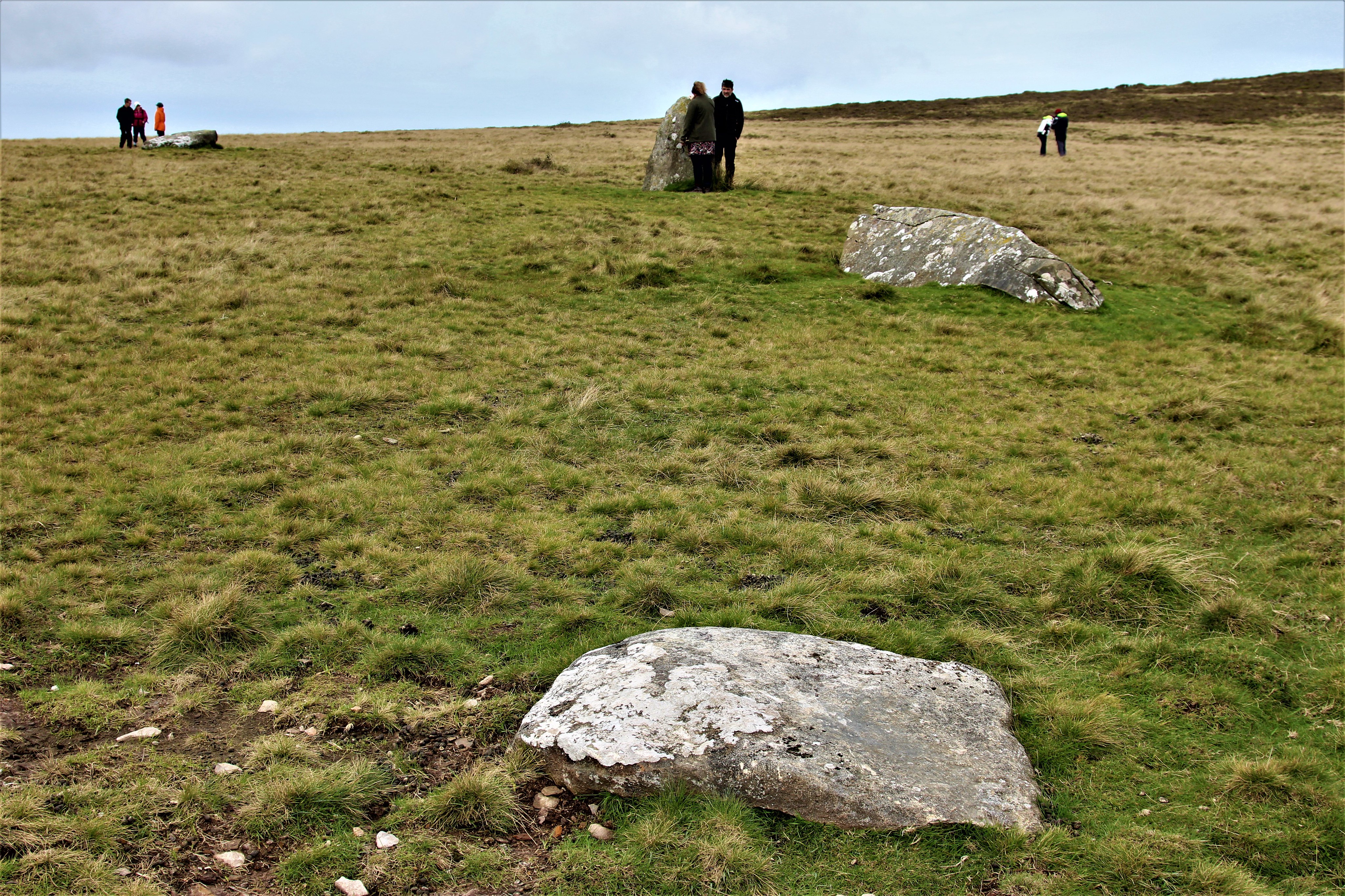 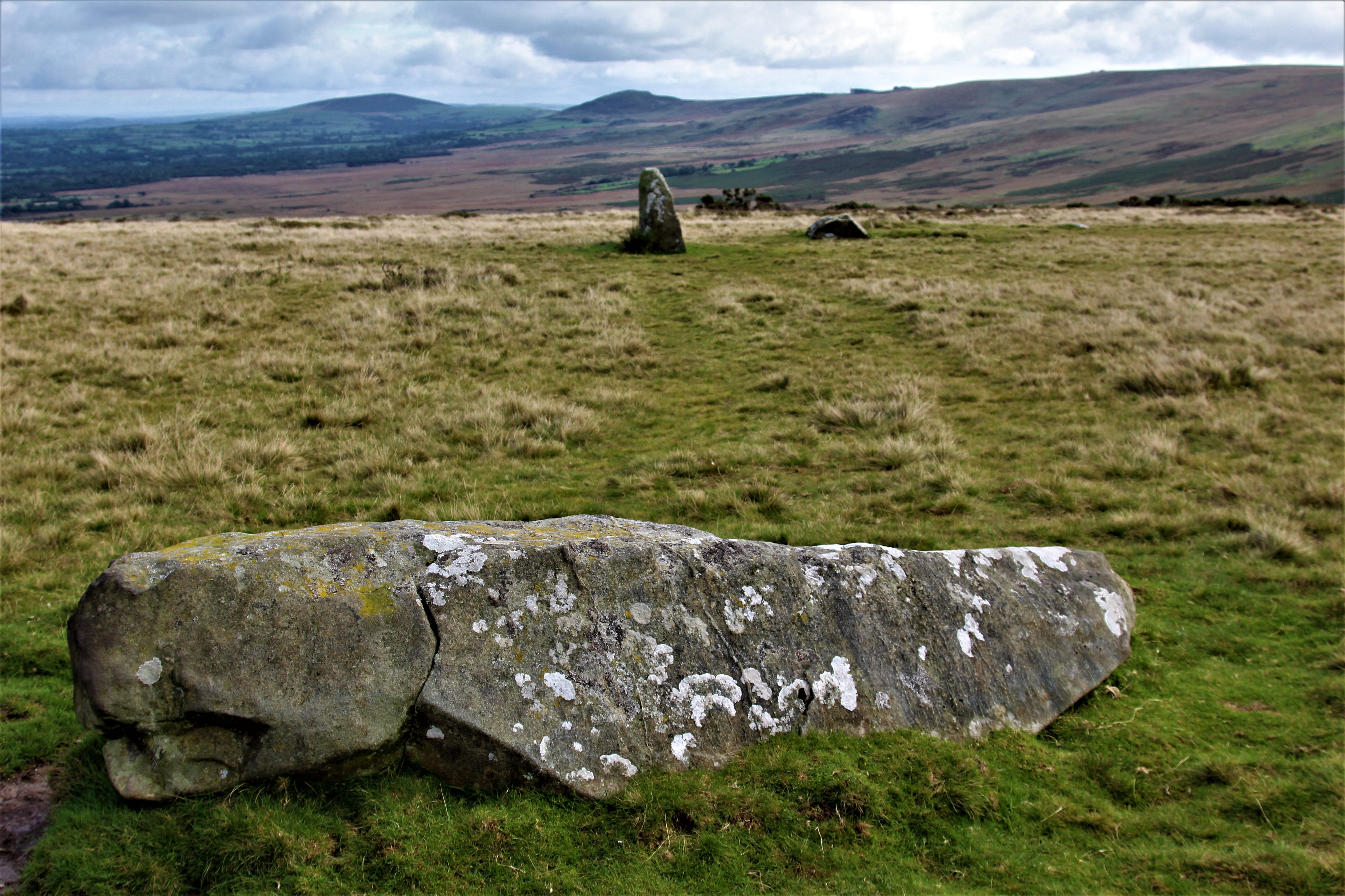 Video clip of Waun Mawn from approximate centre of circle.

In essence, around 3000 BC there was a migration of people and their livestock from the Preseli region of west Wales to the Stonehenge site, an overland distance of around two hundred and twenty miles to the S.E. Incredibly, these people also transported stones to Stonehenge which they removed from one or more pre-existing stone circles in their Welsh homeland. It is thought that the stones were the physical manifestation of deceased ancestors with whom the peoples had some sort of spiritual affinity.

The Cambridge paper speculates that the Stonehenge site had a long tradition of ceremonial gathering and the people movement may have been in context of an initiative to unite the peoples of southern Britain.

THE STAGES OF STONEHENGE

Here is an approximate chronological progression:

♦Phase 1, 3200 BC: A spacious earthen ring with a central timber setting and an outlying stone. Such earthen rings are known as ‘henges’.
♦Phase 2, 2200 BC: Two unfinished circles of Welsh bluestones replaced the posts and an earthen avenue was laid out.
♦Phase 3, 2000 BC: The two circles were removed and replaced by the lintelled sarsen ring and internal horseshoe of five trilithons.
♦Phase 4, 1600 BC: The bluestones were returned. Outlines of a bronze dagger, axes and stylised images were carved at cardinal points on the stones. 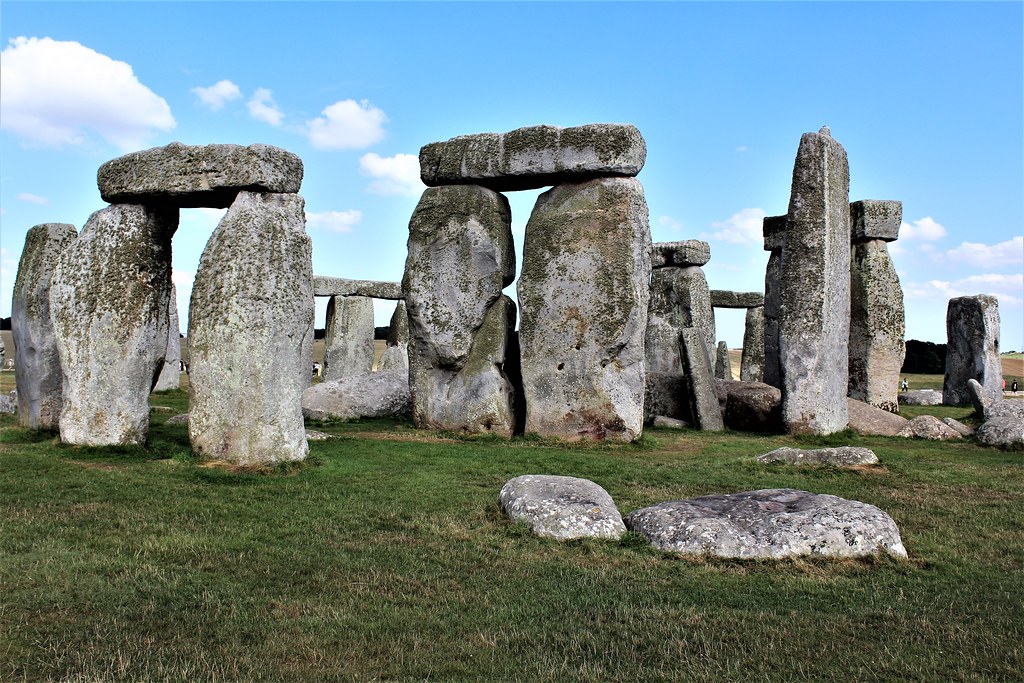 Stonehenge is the iconic manifestation of the Neolithic (New Stone Age) which came to end around 2100 BC. Until this time the British Isles was populated by people with dark to black skin and these were the people who built Stonehenge and many other stone monuments across the islands. 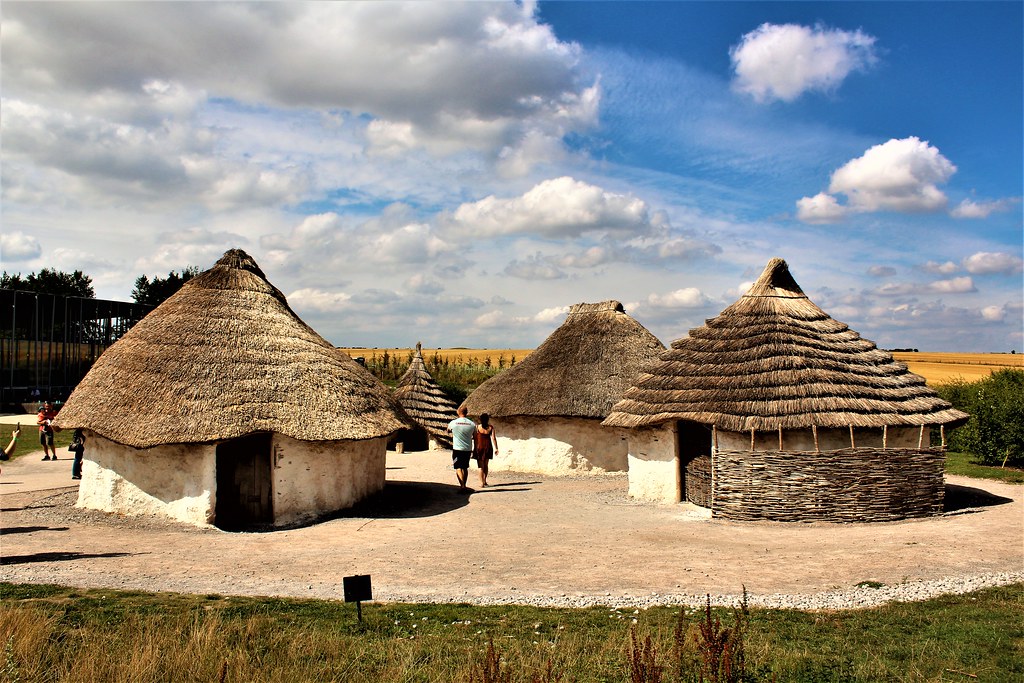 Reconstructed round houses of the Neolithic peoples.

However, between 2450 BC and 2000 BC the dark-skinned populace was suddenly displaced and/or absorbed by a wave of lighter skinned and blue -eyed migrants who had originated from the steppes of Ukraine and Russia. The immigrants are better known as 'beaker folk' owing to the unique style of their pottery. The new arrivals introduced new technology; they forged tools and weapons from copper then bronze and buried their dead in a new kind of tomb. By around 2100 BC it has been estimated that Britons were around 90 pct. beaker folk and this remains the case today insofar as British people who can trace their ancestors back about 200 years.

Stonehenge appears to represent the 'high water mark' of the Neolithic people after which this population appeared to be in decline-until arrival of the Beaker Folk.

WHICH STONES WERE TRANSPORTED FROM WEST WALES?

These are the famous ‘bluestones’ of which 43 remain out of a possible 80 originals. They are not the sarsen trilithons but a separate set of stones standing inside the sarsen ring. Latest research suggests a variety of sources, viz:

·         The dismantled stone circle known as Waun Mawn of which only four stones remain.

·         Other, as yet unidentified, stone circles from the Preseli region. 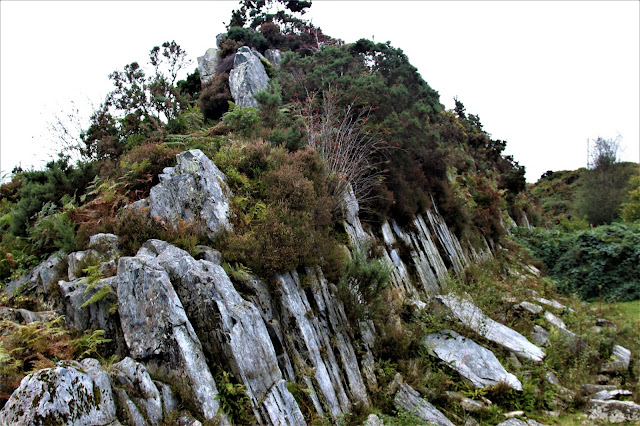 THE WAUN MAWN CIRCLE AND LINKS WITH STONEHENGE.

Waun Mawn is located on the side of the hill Cnwc yr Hy (“the hillock of the deer”). Specific features as follows:

·         The six stone holes and four surviving standing stones may have originally formed part of a circle of 30-50 stones.

·         The four surviving stones are of unspotted dolerite, possibly from the Cerrigmarchogion quarry adverted to above.

·         One of the three unspotted dolerite bluestones at Stonehenge has a pentagonal cross-section at the turf line. This is similar in shape and dimensions to the imprint in one of the stone holes at Waun Mawn.

·         The Waun Mawn stones appear to have been placed at irregular intervals which contrasts with the regular spacing at Stonehenge. The change may be attributed to a new emphasis on regularity and homogeneity.

·         Stonehenge is enclosed by a circular ditch with a diameter of 110m. Of all the British Neolithic monuments Waun Mawn is alone in sharing the same measurements.

·         Geological analysis has revealed that Waun Mawn contributed only a small proportion of Stonehenge’s 80 or so bluestones which mainly consisted of spotted dolerite. This points to the possibility of other sites in Wales contributing to the 80 or so complement of stones at Stonehenge and Bluestonehenge sites.

This is a prehistoric henge and stone circle monument located about one mile to the S.E. of Stonehenge.

The monument has been tentatively dated to between about 3000 and 2400 BC. Radiocarbon dating of antler tools found at the site has provided only an approximate date of 2469 to 2286 BC for the dismantling of the stones.

Excavation revealed several stone settings that are thought to have been erected sometime between 3400-2500 BC, due to two flint chisel arrowheads being found that are in a style commonly used during that period. It is estimated that there may have been as many as 27 stones in a circle 33 feet (10 m) in diameter.Chgarcoal was found in some holes, suggesting that burning may have taken place there. One suggestion is that the henge was a site for cremations. Within the stone circle there were imprints of the bases from the original stones, which have been compared to the bluestones located in Stonehenge and have been found to have matching dimensions.

MOVING THE PRESELI STONES TO STONEHENGE

The map below illustrates a possible route from Preseli to Stonehenge.. Of course, 5000 years ago there were no roads nor did the peoples of the day have use of wheel technology. Moreover, the landscape was largely untamed. This puts the herculaean task of moving eighty stone monsters with average weight 3 tons over 220 miles in context. Such a movement would require sophisticated planning and resourcing skills entailing huge teams of men at a time when life expectancy was about 30-40 years. Moreover, there would be the matter of providing the teams of men with sufficient energy food to move the stones. 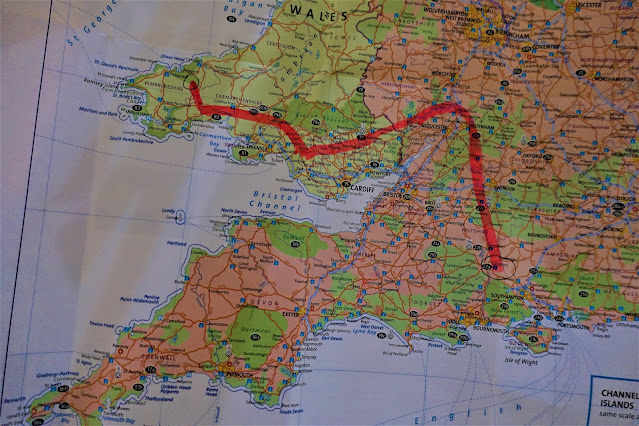