Tonight, I am posting information on a fascinating, historic cross which is located in the Church of St. James a Nunburnholme in east Yorkshire, northern England.

It should be remembered that English churches were, effectively, community centres whose contents and architecture reflect the cultural and other changes which have occurred over the past 1500 years or so.

As described below, the cross reflects migration patterns covering about 400 years, from Anglo-Saxon (N. German) to Scandinavian (Danish and Norse) and Norman French. All of these movements provided the basic building blocks of what became the English language which in turn has become the lingua franca of the world today.

Interestingly, the core of Nunburnholme is of Scandinavian origin and means 'Place at the springs or streams.'The 'nun' element is a later affix derived from a former Benedictine Nunnery nearby.

Key features of the church and cross

Key features of this church are:1. The interior arch which is something of a conundrum and has probably been moved from its original position; it dates from 1100 to 1140 AD.2.The Anglo-Saxon cross which is considered the finest sculpture of its type in East Yorkshire

This is a stone cross with carvings on all four sides straddling the late Saxon, Viking and Norman periods and as such is of great antiquity and interest. It was discovered during 1873 building work in the church of the same name,then incorporated into the church porch but subsequently damaged by the iron fittings which held it in place.

In the past the cross had been split in two and then reconstructed the wrong way so the carvings are not aligned. On top of the shaft is a socket into which a cross head would have fitted. The carvings are complicated and date from various periods including Late Saxon, Viking Age and Norman. A picture of this cross against background of the arch is shown below. 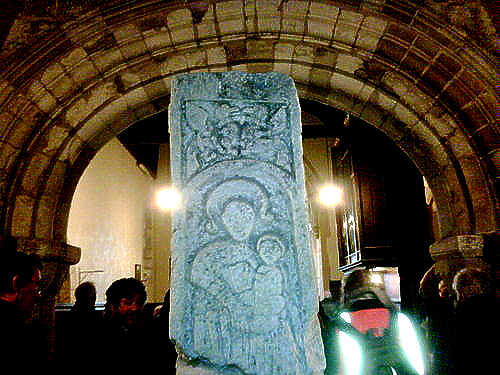 Image of cross against background of interior arch.

A video clip of the cross is provided below. Key features are summarised below:

Clearly, this ancient cross is deserving of a visit. The church is located about twenty miles east of the city of York,