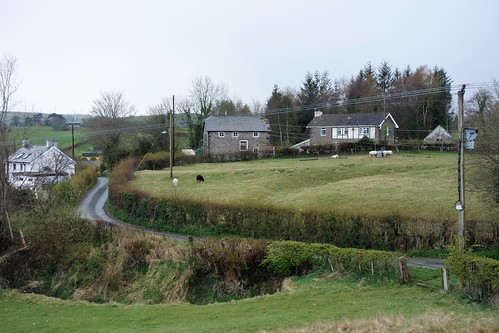 Llanllugan is a hamlet which lies on a back road in the heart of Montgomeryshire, Wales It is about thirteen miles west of Welshpool on the England-Wales border. Here can be found St Mary's Church, the adjacent farm of Tynllan and a small number of houses.
The place-name is first recorded as Llanlugan in 1239. A Cistercian nunnery was in existence from about 1217 through to 1536 with no remains extant.
St Mary's church (below) is a simple, single-chamber building, probably of 15th-century date. Inside is an important collection of Cistercian stained glass. The font may date from the 13th century.St. Mary's Church, Llanllugan, formerly attached to the Cistercian nunnery founded by Maredudd ap Robert some time before 1188, may also be located on the site of the sixth century foundation of Llorcan Wyddel. The extant building dates almost entirely to the late fourteenth and fifteenth centuries, and consists of an undivided chancel and nave, south porch, and overhanging wooden bellcote on the west wall. The late medieval roof structure remains, together with much original fifteenth century stained glass in the east window.
Preaching Stone in the image at foot of post is connected with revivalist, Hywel Harries who was active around 1760. It is located close to the church, on opposite side of the road. 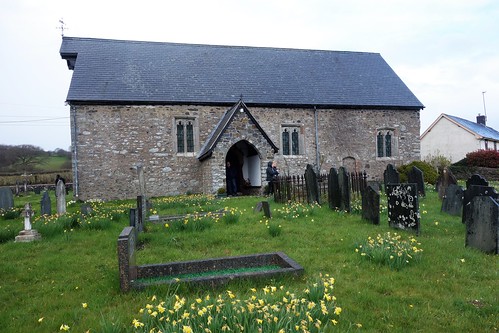 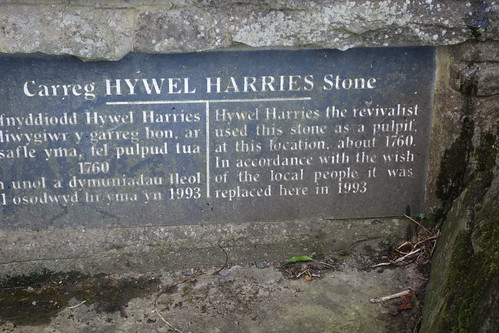