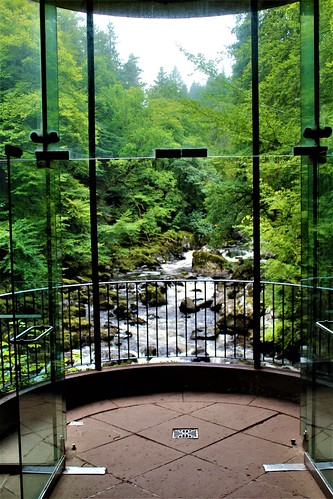 (Above image is a capture of the view from the balcony at Ossian's Hall.)

This evening, I am posting information on the Falls of Braan, which are located in central Scotland, a few minutes north of Dunkeld.

View looking downstream from the Falls with Ossian's Hall in top left. 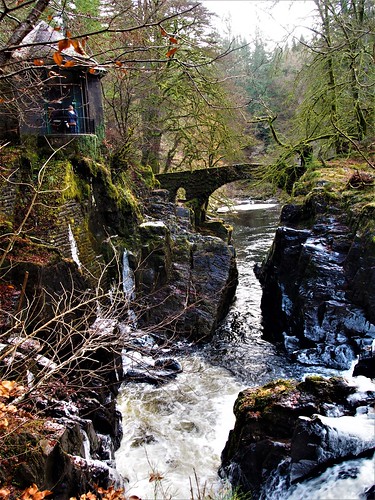 These falls are popular with visitors. Access is a one mile drive north from Dunkeld, along the A9 then a left turn at a sign to the Hermitage here there are are parking facilities. Visitors stop here and then walk upstream, along the bank of the River Braan for about eight minutes until reach a strange building called Ossian’s Hall.

The Hall dates from the late 18th century but has been restored in recent years. It is open to the public and affords a superb, balcony view of the Falls.

Video clip of interior of Ossian's Hall and Falls of Braan.

The path to Ossian’s Hall passes through magnificent Oregon Pine and other conifers and then to the side of a deep pool (of the river) where salmon can be seen during the migratory season.On the opposite bank of the pool can be seen one of the tallest trees in the British Isles.

The falls are usually in full flow during the Spring/early summer or after heavy rainfall.
Falls of Braan