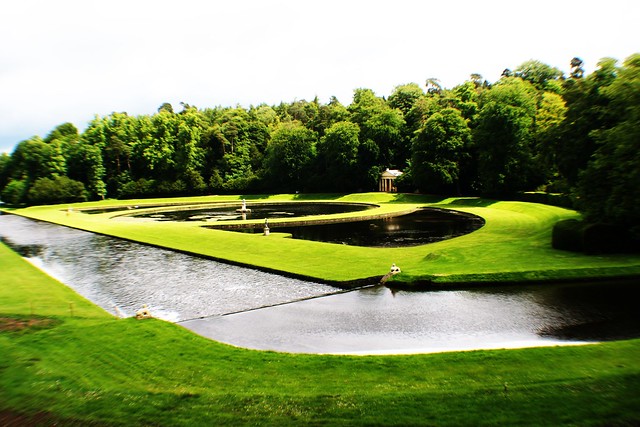 This evening, I am posting information on Studley Royal Water Garden which is linked with nearby Fountains Abbey in North Yorkshire, England. The sites comprise a major visitor attraction and are owned by heritage organisation, the National Trust.

The Water Garden is a stunning piece of landscape engineering.It was the creation of John Aislabie (1670-1742) and his son, William Aislabie (1699-1781).  John held high Government office rising to Chancellor of the Exchequer but was forced to exit public life in disgrace after involvement in corruption associated with the South Sea Bubble stock market speculation. After paying his fine he was released from prison and then devoted his energies to his scheme for canals and cascades in the Skell Valley.

John Aislabie engaged a team comprising architect, water engineer, master masons, gardeners and a force of 100 workmen to implement his plans which entailed clean lines of formal gardens, canals, cascades and formal ponds. In conjunction with this aquatic scheme there were devised vistas and sight lines drawing the visitor’s eye to follies of stone and wood  coupled with an outlook to nearby Fountains Abbey.

William Aislabie inherited the estate upon death of his father. He aspired to build a Chinese Garden but few traces of this remain. In 1767 William purchased nearby Fountains Abbey and then proceeded with a project to link the Abbey with the Water Garden.

Key aspects of this World Heritage Site feature include:

Here is a video clip of the Water Garden