Spectacular hoard of treasure found on hill in eastern Scotland 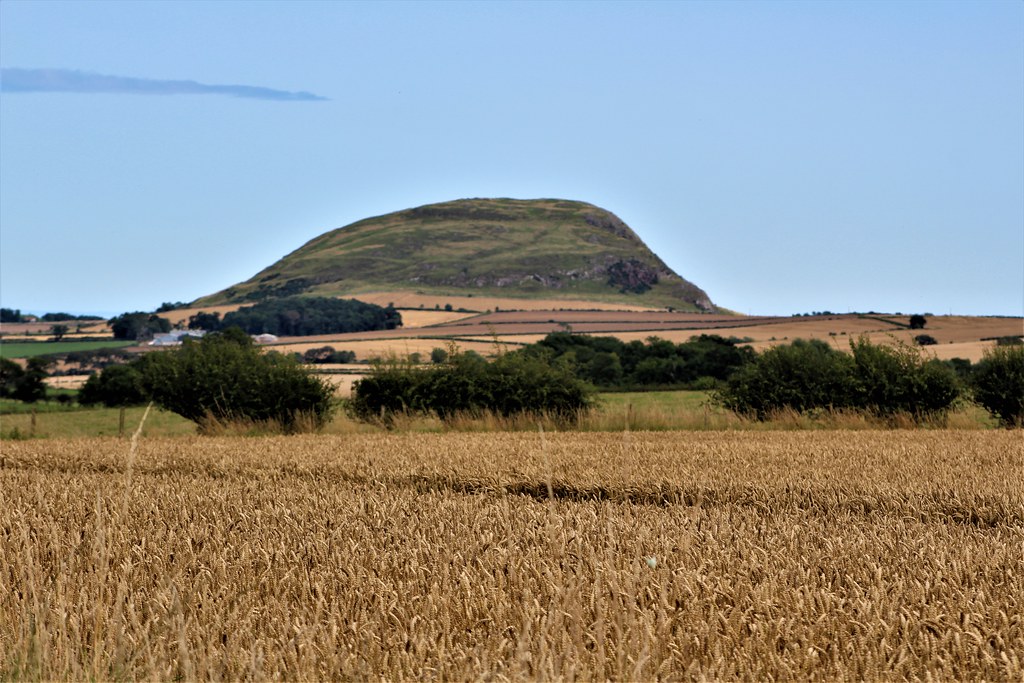 (Above image is a capture of Traprain Law, East Lothian today.)

Part of the Traprain Law hoard at National Museum. 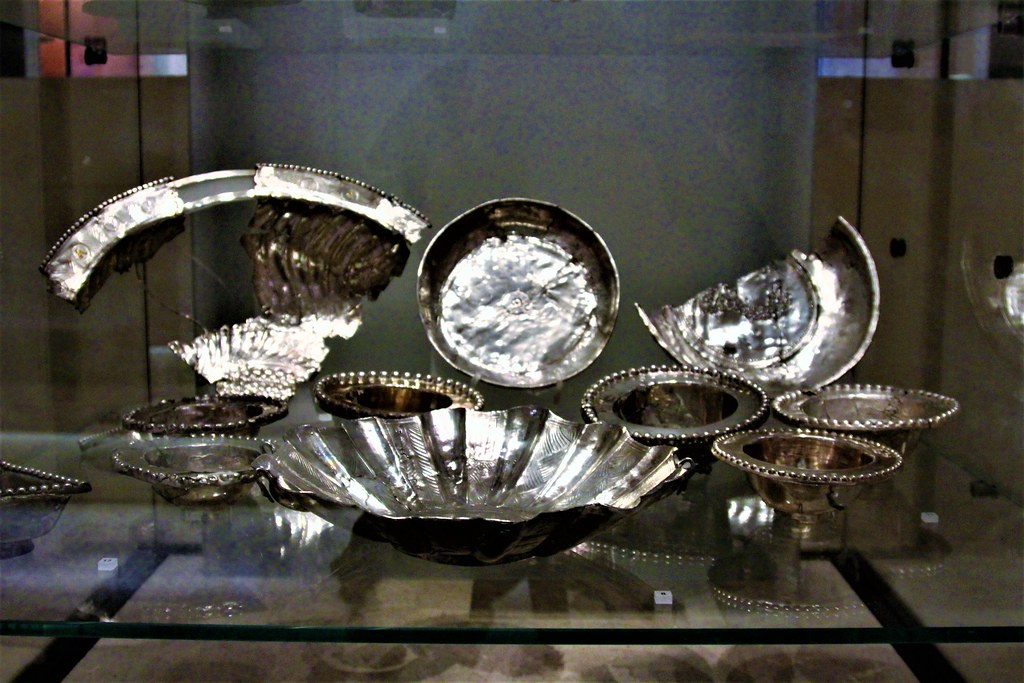 Question: What is the link between the hoard of silver on display in the National Museum of Scotland and the 725 ft high hill known as Traprain Law in East Lothian, Scotland?

Between the period AD 43 and AD 410 the area of land which more or less correlates with what is now England was part of the Roman Empire. For most of the occupation period Hadrian’s Wall (which is just south of the modern political divide between England and Scotland) and the open frontier which preceded it formed the northern boundary of the Roman Empire, although this did not prevent the Romans engaging in various military adventures deep into what is now Scotland.
Prior to and during the Roman occupation the native peoples in what is now mainland U.K. were divided into regional tribes with no overarching central authority. This set up was not dissimilar to the tribal system existing in North America prior to arrival of the Europeans.

Some of the British tribes were pro-Roman whilst others violently resisted the invaders.
The native British tended to have their capitals (power bases) on hill tops which could ‘see and be seen’ and be relatively easily defended. At this time, about 2000 years ago, the landscape was heavily forested and populated by, amongst others, wolves and bears (now both extinct) plus potentially hostile neighbours. In Britain today we have the remains of many, possibly hundreds, of former Iron-Age hill forts one of which is located about 5 miles from where I am writing this, in the west of Scotland.

During the Roman period Traprain Law appears to have been the heavily populated capital of a tribe known as the Votadini who occupied the eastern coastal section of modern southern Scotland and north-eastern England.

The Votadini appear to have enjoyed a non-confrontational/cordial relationship with the Romans and for a brief period during the time when the Antonine Wall formed the northern boundary of Empire (AD 142-160 approx.), the entire territory of the Votadini would have been incorporated into the Roman Empire.

The hoard of silver now in the National Museum was discovered by archaeologists in 1919. Research suggests that the high quality pieces of silver were deposited at the site over a period of around 100 years, during the 5th century, when the Western Roman Empire was in decline.

The treasure consists of fragments from over 250 silver objects that had been cut into set weights of bullion and transferred to the Votadini possibly by way of diplomatic gifts (bribes) and/or payment for military assistance. Why this store of wealth was buried and never recovered is open to speculation.

Refer this site for more information on the extensive and complex archaeology on Traprain Law. 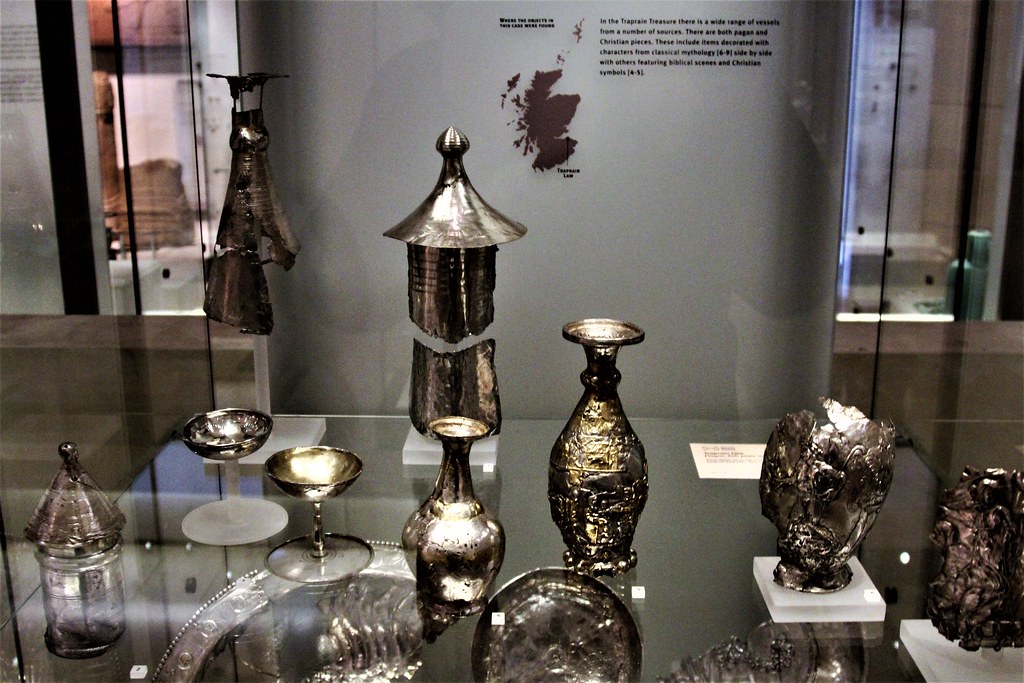 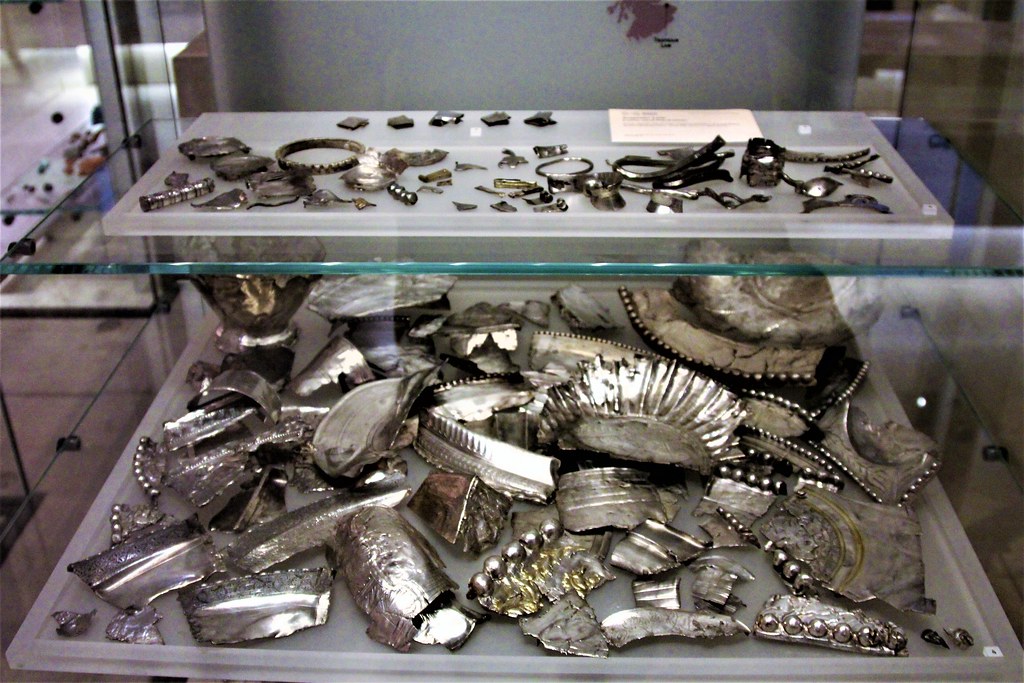