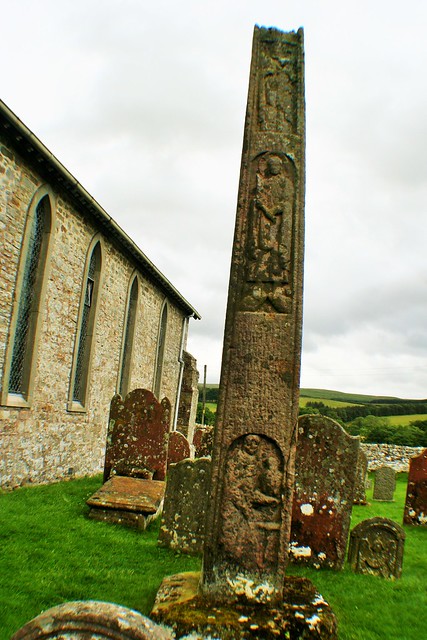 This evening, I am focusing on the Bewcastle Cross, which dates from around AD 700-800 and is believed to be one of the finest Anglo-Saxon crosses in England.

Video clip of the Bewcastle Cross.

Bewcastle is a hamlet located about twenty-five miles N.E. of Carlisle, just south of the border with Scotland.

The name Bewcastle means ‘Roman fort within which shelters or huts were situated’. It is a blend of Old Scandinavian buth and Old English caester.

The cross sits on a very historic site. The origins of a church here are opaque with first reference dating back to the 1200s. However, the church and nearby ruined 14th century castle both occupy positions in a former Roman fort being an outpost of the Hadrian’s Wall frontier which dates back to the 2nd century AD. 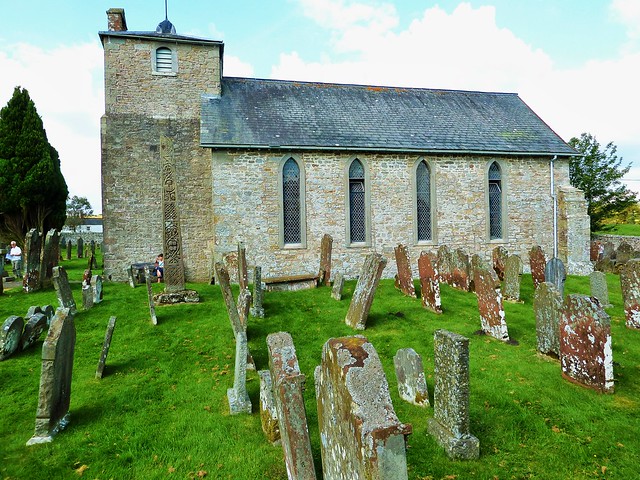 The cross may have been created during the reign  (AD 670-685) of Ecgrith, King of Northumbria.

The obelisk was originally about 20 feet high. Unfortunately, the uppermost portion (head) is missing. Inscriptions are in German runic alphabet which apparently refer to 7th century Northumbrian royalty but the cross may actually date from the 8th century.

Details of the carved panels:

West Face: top-St John the Baptist carrying the Lamb of God;  middle-Christ standing on the heads of swine; bottom-a figure of a man in a tunic carrying a spear, scroll or stick and lifting a large bird.
North face: Two panels of foliage and fruit, vine scroll of early Italian-Greek Christian art.
East face:One continuous vine-scroll with animals and birds.
South face: Three symmetrical interlacing panels and two panels of foliage. There is also a sundial attached like a large leaf.