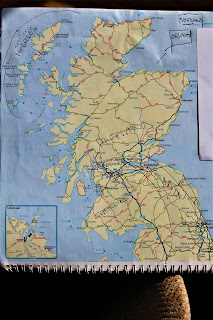 (Above image is capture of a Scotland map illustrating the ethnic regions discussed below.)

This evening, I am posting information sourced from an article in yesterday's Times newspaper which reports an academic study confirming that Scotland's constituent ethnic clusters have effectively remained undisturbed from the period AD 500- AD1000 which was known as the 'Dark Ages'.

In essence, Scotland is divided into six main clusters of people each of which has a discrete gene pool, viz:
(# Northern Isles)

The above groupings roughly correlate with known regional kingdoms of the time, viz:
Lasted for 400 years, stretching from capital at Dumbarton near Glasgow into N.W. England.
The Picts were a loose confederation of celtic people, probably speaking a Brittonic (Welsh) language. This grouping occupied territory north of  a line between modern-day Glasgow and Edinburgh which lasted until the 9th century.
( S.E. stretching from Stirling through the Scottish Borders region into northern England near modern-day Newcastle.

The study was based on the genetic make-up of 1000 people from Scotland whose grandparents or great-grandparents were born within 50 miles of each other. DNA from this sample was compared with DNA of persons who lived thousands of years ago.

Orkney and Shetland have the highest levels of Norwegian ancestry outside of Scandinavia, which is not surprising as the islands were ceded from Norway to Scotland as recently as 1472.

The study adverted to above was funded by the Medical Research Council, Science Foundation Ireland and the Chief Scientist Office of the Scottish Executive. It is published in the journal Proceedings of the National Academy of Sciences of the U.S.A.
Scotland's DNA